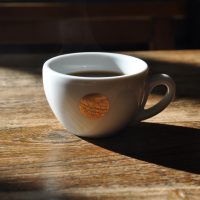 Soloist Coffee Co. was my first experience of speciality coffee (or any sort of coffee, for that matter) in Beijing, unless you count the coffee I was making for myself in my hotel room. I’d tracked it down on the internet, picking it largely for its location, near Tiananmen Square where it would provide a useful break from the hard work of being a tourist.

Located on the narrow, straight and surprisingly low-rise Yangmeizhu Byway, the whole area around Soloist is worth a visit for its own sake, representing a slice of old Beijing, albeit one which is being rapidly gentrified by the likes of Soloist. The coffee shop itself occupies a two-storey building on the north side of the alley, catching the sun, which, during the winter at least, bathes the interior in a warm light. There’s plenty of seating both downstairs and in the delightful upstairs room, plus there’s a large balcony at the front overlooking the street.

The coffee’s all roasted in-house at Soloist’s other site, with an espresso blend and several single-origins available on pour-over through the V60. There’s also a western-influenced all-day brunch menu, although all-day is stretching it since Soloist doesn’t open until noon!

I arrived at Soloist at 11.45 only to find it completely empty. I wandered off to explore the local area, returning without much hope at midday. Looking in the window, there seemed to be activity inside, so I gave the door a push and found, to my surprise, that it was open. A single barista was in the process of taking the first customer’s order while turning everything (espresso machine included) on. It was slow going, so if you’re in a hurry, my advice is don’t come until one o’clock which, incidentally, is when all the other customers started arriving, which meant I practically had the place to myself for an hour. Bliss. It’s also worth noting that the sole member of staff has to do everything, including making all the food, so the service isn’t very quick.

That said, Soloist is an excellent place to linger. It has a simple layout, a single, square, floor-to-ceiling window on the left and a tall, narrow glass door on the right. It’s perhaps three times as deep as it is wide, with a cluster of seats in the window at the front, followed by the counter on the left and the remaining seating on the right. At the back, stairs lead to an upstairs room.

The counter’s an interesting affair, suspended from the ceiling by steel rods. It’s in two parts, with a smaller section near the window housing the till, followed by a larger one for the coffee. You can sit at this second part if you like, a row of six stools lining the counter’s front. The part nearest the till houses the pour-over area, complete with three built-in sets of scales. Each of these has a stop clock in front of it, which reminded me of my school days. I’d hoped that these were used to time the pour-overs, but they’re just for show, the scales having built-in timers. Next comes a row of Silverton drippers which, I believe, are used for making tea. At the back, there’s a red La Marzocco GB5 espresso machine and EK-30 grinder. Finally there’s a small roaster at the back next to the counter, but it’s only for show.

The look/feel of Soloist is pure hipster, complete with concrete ceiling, exposed brick walls and bare light bulbs. There’s a bicycle by door and another on wall left of window. Upstairs it’s just as on-trend, but here it’s predominantly wood, from the floorboards to the exposed ceiling beams. There’s a mix of two- and four-person tables, as well as a cosy corner at the back on the right (your left as you come up the stairs) with a pair of padded benches. The best feature’s at the front where folding wooden doors section off a large balcony overlooking the street. There are five two -person tables arranged around the balcony’s edges.

I had the egg salad pita pocket for lunch which is pretty much what it says: a rather tasty egg salad with plenty of lettuce stuffed into a soft, chewy pita bread. I paired this with a V60 of a naturally-processed Ethiopian coffee which wasn’t on the menu, but which the barista offered me all the same. He also came over to my table when he’d ground the coffee to offer it to me to smell, which was a nice touch.

My coffee was served in a narrow glass carafe on copper tray, an espresso cup on the side. It was beautiful red colour in the sun, with light flavours but at the same time, plenty of body. An excellent cup of coffee, it was a great advert for speciality coffee in Beijing.

I followed this up with a one-and-one, a split shot espresso/macchiato. It’s fair to say I wasn’t as impressed with Soloist’s espresso blend, which was dark and a little bitter for my tastes, but it’s the sort of thing that I’d have loved five years ago! It does, however, go nicely in milk, where the sweetness offsets the espresso’s bitterness. I was also mightily impressed with the latte art, considering it was done in an espresso cup. What’s more the milk held the pattern to the bottom of the cup!