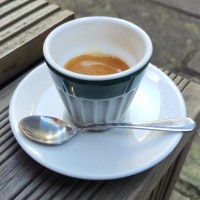 To mark my return to the UK, Monday’s Coffee Spot is somewhere I’ve been meaning to visit for all most as long as I’ve been doing the Coffee Spot. Expresso Base is in the courtyard of St George’s Church, near the British Museum and just across the way from the original site of Wild & Wood. It’s easy enough to miss and is closed over the weekend, which might go some way to explaining how I’ve managed to not go there for almost four years (which, incidentally, is how long Expresso Base has been going, having opened a few months before I started the Coffee Spot).

Essentially an outdoor café, Expresso Base occupies the right-hand side of the churchyard, with plenty of seating and a gazebo at the back which houses the two-group La Marzocco. If it’s raining, additional umbrellas, etc, can be put up to provide shelter, but on a sunny day, there’s nothing better than sitting on one of the wooden benches and enjoying your coffee in the sun. The coffee, from Has Bean, is always a single-origin and changes on a regular basis, while there’s a small selection of cake if you are hungry. There’s also a guest roaster which changes every week.

It’s a delightful place, occupying a large, outdoor space in one of the busiest spots in London. However, despite this, it feels very secluded. Set back from the busy Bloomsbury Way, you’re not bothered too much by the traffic and, with St George’s church towering over you on one side and an old, brick-built building (now a hotel) on the other, you feel isolated (in a good way) from the city’s endless bustle.

The space itself is long, but quite wide, narrowing slightly at the back. There is garden-style wooden seating to the left and right, with a couple of two-person tables in the centre, Gennaro resisting the temptation to cram too much in. As well as the tables, there is a two-seating bench-seat on the left, along with another pair of two-seater benches facing each other across a coffee table. On the right is a row of single seats with tables/armrests built-in between them. With all the stone and wood, it could be quite austere, but Expresso Base has planters and pots liberally spread around, bringing much-needed greenery to the place.

There are huge umbrellas and other covers for when it’s raining, although once under cover, Expresso Base loses some of its charm. This doesn’t detract from the quality of the coffee, but it doesn’t encourage you to linger as long as when you’re sitting in the south-facing courtyard on a sunny day. This is just one of the best places to sit outside in London, particularly if the weather is good. I was there on a bright, but cold, early February day and it was lovely.

Gennaro, an Italian, has blended the espresso culture of his homeland with third-wave coffee. Think, if you need to, of a calmer version of Edy Piro of Terrone & Co (although a less calm version of Edy’s a truly terrifying thought!). You’ll find Gennaro at the back, behind the two-group La Marzocco, dispensing coffee which, along with the lovely setting, is the main draw of Expresso Base.

Expresso Base uses Has Bean, with a single-origin on espresso at all times (there is only one grinder). This changes regularly, with Gennaro favouring washed coffees. However, during my visit, he was serving a natural Ethiopian Gebed Kuruma.

My coffee arrived as a commendably short double espresso in a handleless cup. As an espresso it was very fruity, but in that way that Ethiopian espressos sometimes are, it was very smooth with good balance. At Gennaro’s insistence, I tried it as a piccolo (on the house) to see how it went with milk. In this case it was even better, the milk and the coffee in perfect harmony, the sweetness of the milk combining well with the fruitiness of the coffee. As much as I liked it on its own, in milk it was perfect. The last time I experienced something so sublime in milk was when I had with another Ethiopian single-origin in Plenty in Philadelphia two years ago.

July 2018: Expresso Base has returned to it’s original name, Espresso Base, so I’ve updated the title, but left the rest of the write-up as is. If you’re interested, you can see what London coffee legend Phil Wain made of Espresso Base back in 2012!

3 thoughts on “Espresso Base”