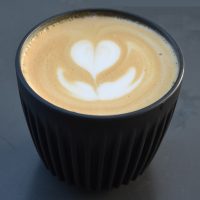 Although I’ve been through Washington DC a few times on the train, I rarely visit the city itself. So, when I took the sleeper down from Boston during last month’s USA trip, I was determined to make the most of the opportunity. I didn’t have long, so made a beeline for Peregrine Espresso’s Eastern Market location on Pennsylvania Avenue, a half-an-hour stroll from Washington Union Station past the US Capitol.

Peregrine Espresso occupies a small unit with a wide, glass front and a generous outdoor seating area which is actually on 7th Street, just around the corner from Pennsylvania Avenue. Due to the COVID-19 pandemic, it’s currently takeaway service only (so don’t forget to bring your own cup), although you’re welcome to sit outside with your coffee. In more normal times, there’s more seating inside, but this has been cleared away to provide plenty of space for customers who are queuing to order/waiting to collect their coffee.

Talking of which, Peregrine Espresso serves a concise espresso-based menu with a batch brew option, all the coffee roasted by Small Planes Coffee, owned by founders, Ryan and Jill Jensen. There’s also a selection of tea, plus a range of cakes and pastries.

I arrived at Union Station early on a crisp, clear Sunday morning and, after a stroll past the United States Capitol, where I felt I had the city to myself, I reached Peregrine Espresso just after opening time. The coffee shop is part of 660 Pennsylvania Avenue, a large building on the north side of the avenue. Despite the address, Peregrine Espresso is down the side of the building, just around the corner on 7th Street.

A large, fenced-off outdoor seating area in front of the coffee shop has tables arranged around the edges: a pair of two/three-person tables on the left, another to the right, and a fourth at the front. This leaves the remaining area free for customers going in/out of the shop. A central floor-to-ceiling window is flanked by two doors: you enter on the right and exit on the left. The only exception online order collection, in which case you enter/exit on the left.

Peregrine Espresso occupies a simple, rectangular space, about three times as deep as it is wide. The counter is on the left, set back from the front, leaving an L-shaped space along the front and down the right, which, judging from old photos, used to house the seating, with around eight tables and a small bar between the counter and the front on the left.

These are now all cleared away, although the bar on the left remains, pressed into service to hold the lids, milk and other takeaway accoutrements. Opposite this, against the right-hand wall, a row of tables holds the retail bags of coffee, while a trolley fills the gap between the front of the counter and the right-hand wall. Entering on the right, you therefore pass the retail bags of coffee on your way to the trolley, where you order.

The cakes and pastries are in a display case to your left, with the menu on the wall beyond that. Having ordered, you move to the front of the counter (to your left) to collect your order before exiting through the left-hand door. Alternatively, if you’ve ordered online, you can come in through the left-hand door, head straight for the counter, pick up your order and head back out again.

When I first visited Peregrine Espresso’s MidCity location, the coffee was from Counter Culture, but since then Ryan and Jill, the team behind Peregrine Espresso, have started their own roastery, Small Planes Coffee, which is now used in both shops. There are different options on espresso, batch brew and iced coffee, changing every few months.

I had a cappuccino to start my day, served in my HuskeeCup and made with the Diego, a single-origin from Guatemala. This was smooth and creamy, a lovely way to get Sunday underway. Before I left, I bought a bag of another Guatemalan, the Lucinda Puac Pérez, which was the filter option and which I’ve been enjoying through my V60 since I returned from America.