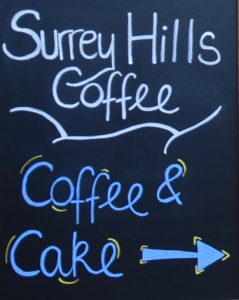 For a long time, my home town of Guildford had been crying out for an independent, speciality coffee shop. Then, two years ago, along came Surrey Hills Coffee, a local roaster which opened its own coffee shop on Chapel Street, taking over the lease from TurnFit Deli. These days, Surrey Hills has some good company, with Canopy Coffee opening last year and Krema Coffee coming along this year.

However, the shop on Chapel Street was never ideal, effectively being someone else’s space, with a small, cramped layout. The owners, Monika and Chris, who roast all the coffee in a roastery in Forest Green in (you guessed it) the Surrey Hills, had been looking for a new, bigger home. Now they’ve found it, Surrey Hills moving just a few streets away to Jeffries Passage at the top of the High Street.

The new shop is bright and spacious, with an upstairs as well, although that’s currently work-in-progress. Right now, Surrey Hills is up and running, with a basic coffee-and-cake offering (espresso, batch-brew filter and pour-over), along with the full retail range of coffee, although as things settle down, the plan is to serve breakfasts and light lunches too. Watch this space!

Despite the very welcome growth in new coffee shops, I’ve always had a special affinity for Surrey Hills, always trying to bring something special back from my travels for the staff. I’ve known since the start of the year that, with the Chapel Street lease up for renewal, Monika and Chris were looking for somewhere bigger. Nevertheless it was something of a shock when, not long after returning from Thailand, I wandered down Chapel Street to find the shop (literally) empty.

Surrey Hills had found a new home in Jeffries Passage, but in a story I hear far too often, getting the lease signed was a long, painful process, with the lease on Chapel Street expiring before the new premises were ready. This led to a rather fraught four weeks when Surrey Hills was homeless, culminating in a somewhat frantic fit-out. As you can see from the gallery, Chris, Monika and the team (mostly staff from Chapel Street) did a fantastic job, turning the place around in less than two weeks. I visited five days before it opened and was amazed by how quickly they transformed things. Maybe I should ask them over to do some work on my house…

For those that don’t know, Jeffries Passage is a narrow, pedestrian alley running down from the top of the High Street to North Street, with Abbot’s Hospital on the right and a row of shops, mostly two-storey, on the left. The alley doesn’t get much daylight, but this is compensated for by a massive window, which runs the full width of the store (which is about twice as wide as it is deep), terminating in a glass door on the right.

Turning to the coffee, Surrey Hills is keeping things simple for the moment. The Holmbury Hill blend (60% Brazil, 40% Colombia) is on the main grinder, with a guest on the second grinder, plus the Cottage filter-blend on batch-brew through the ever-reliable Moccamaster, available on the counter in a self-serve flask by the till. There’s also pour-over through the Chemex. I believe that the range is limited at the moment, but I suspect that more coffee will be on offer once things settle down.

I missed the re-opening, which was cunningly timed for the Saturday of the World of Coffee in Amsterdam, but I popped in the following Saturday to say hello. Sadly I missed Monika and Chris, who were having the weekend off (don’t blame them) but was well-looked after by barista Tiago and also got to say hi to Gina (another Chapel Street stalwart) who popped in on her day off for some coffee…

I brought with me my customary gift, a single-origin Colombian filter from Amsterdam’s Back to Black, which I exchanged for a flat white, made with the Holmbury Hill blend, something of a novelty for me since Monika’s usually pressing the latest single-origin espresso or pour-over on me. I remember enjoying a previous version of the Holmbury Hill as an espresso in Chapel Street, and I’m pleased to say this version went equally well in milk, producing a rich, bold coffee with lots of flavour.

April 2019:  I’ve updated my piece on Surrey Hills Coffee. This is the original write-up, published in July 2018. For an up-to-date description, please see the updated post, while you can see what’s changed in my Coffee Spot Update.