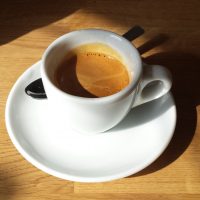 In April, I heard rumours of a new coffee shop in my home town of Guildford from my friends at Surrey Hills Coffee. By May, I’d identified the site, an awkwardly-shaped corner unit opposite Waitrose. I became a regular visitor, wandering past and watching the coffee shop, Canopy Coffee, take shape over the next two months, wondering when it would open. The big day came in early July. Naturally, I was in America, so missed it.

Hurrying back, I made up for lost time by becoming a semi-regularly visitor. I’m trying to work my way through the coffee menu, but Jonathon, the owner, changes it faster than I can drink it! A multi-roaster, Canopy gets small quantities of beans from roasters around the country, including Origin, Square Mile and, most recently, North Star. There are two options on espresso, with two more on pour-over through the Kalita Wave or Chemex. Canopy’s also experimenting with batch-brew through the Moccamaster for those in a hurry.

The food, by the way, is as special as the coffee, with an all-day breakfast/lunch menu featuring various staples on toast, locally-produced quiches and salads, backed up by a range of mouth-watering cakes, again all baked locally.

I’d been aware that a coffee shop might open on Hayden Place since the start of the year. My first thought you’d fit a coffee shop into such an awkward spot! I’ve seen some strange-shaped spaces in my time, and this was one of the most challenging! However, rest assured that Canopy Coffee has done a marvellous job. I was sceptical, but Jonathon has proved me wrong.

Canopy comes in two parts, the main area, with the counter, to the left, with a smaller (but less awkwardly-shaped) seating area to the right. There’s also some lovely, sheltered outdoor seating to the right, which, like the front of Canopy, catches the afternoon sun.

Canopy has two doors, but the right-hand one is staff-only, so head to your left, where you’ll find Canopy’s shop window, two of them in fact, flanking the central door. This deposits you in front of the counter, which, starting in the left-hand window, runs down the left-hand wall and across the back. However, because Canopy’s on a corner, the left-hand wall’s at a 45⁰ angle, making for the aforementioned awkward space. It’s also a small space, so to maximise the counter area, the espresso machine is on the back wall, along with the small kitchen area. This has the added advantage of making Canopy wonderfully open, with few barriers between staff and customers.

There’s not much seating, just a corner bench unit in the right-hand window as you enter. The remaining seating is in the other room, accessed via an opening in the party wall. This used to be a small sitting room for a terraced house; you can see the old chimney-breast on the right-hand wall. There are narrow bars along the back walls, with two small tables on the front wall and another in the middle. It’s cosy without being cramped.

The real draw’s the coffee. On my first visit, Origin’s Resolute blend was on espresso, with various filter options from Square Mile. Jonathon suggested Square Mile’s Mormora single-origin from the Ethiopia’s Guji region as an espresso. A complex coffee, it was bright on the first sip, fruity on the second and more rounded on the third. I returned two days later, trying it as a flat white, where it went surprisingly well in milk.

Since then, I’ve sampled a variety of coffee, most recently from North Star. I started with the Dark Arches blend, a gorgeous, well-balanced, full-bodied espresso, which I also had a piccolo, with some impressive latte art from barista Rowan. As good in milk as it was on its own, the milk brought out notes of dark chocolate. I tried a Chemex of North Star’s Colombia Los Naranjos, shared with a friend, another really well-balanced, juicy coffee, very unlike a typical Colombian. In fact, had Jonathon told me it was a Kenyan, I’d have believed him.

Finally, I slipped in a decaf flat white using Origin’s San Fermin Colombian. I’d had it twice the previous weekend as was as drinking it at home. However, this was the best of the bunch, a lovely, fruity coffee and superb in milk.

Although the coffee’s the main draw, the food’s also amazing, particularly given the small size of the kitchen space. I’ve tried the avocado on toast, a couple of the quiches and had a fantastic lunch, consisting of a fruit bowl, walnut toast and seasonal salad. Everything has been very tasty and an interesting mix of flavours/textures. Finally, the cakes are just as good: so far I’ve polished off a cinnamon bun, vegan carrot cake, blackberry and apple tray bake and raspberry frangipane.

May 2020: Canopy has reopened for takeaway only during the COVID-19 pandemic. You can see what I made of it when I visited at the end of May.

December 2020: Canopy Coffee won the 2020 Best Takeaway Coffee Award and was a runner-up for the 2020 Brian’s Coffee Spot Special Award.

May 2021: Canopy has now reopened a small amount of its indoor seating, following the relaxation of the COVID-19 restrictions in England.

September 2021: Canopy has a new owner, Jackie, with Jonathon moving on to pastures new in Cambridge.

June 2022: Canopy has taken over the vacant container/coffee pod in London Square, which used to be run by Surrey Hills Coffee before its enforced closure at the start of the COVID-19 pandemic.