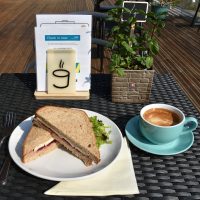 I first heard of Open Grounds Café, another new addition to Guildford’s speciality coffee scene, in November last year, when Jonathon of Canopy Coffee tipped me off about a new coffee shop opening in the Baptist Church on Millmead, down by the river. I duly popped down in December, during that brief period when sit-in customers were allowed in the run-up to Christmas, but I didn’t have time to write it up. Then came further COVID-19 restrictions and Open Grounds switched to a takeaway operation.

However, at the start of April, the COVID-19 restrictions were relaxed, allowing coffee shops to serve customers at outdoor seating. This was something that Open Grounds, with a large terrace in front of the church, was ideally placed to take advantage of. I made a brief visit (on my way to a wedding) and then returned last week for a more in-depth look.

Open Grounds is very much a lunchtime coffee shop, opening from 10:00 to 14:00, with a standard espresso-based menu built around a single-origin Brazilian from Ethicaladdictions, plus decaf and batch brew filter. There’s tea, soft drinks, soup, a small selection of sandwiches and curry puffs, plus a range of cakes, scones and pastries.

Open Grounds Café is part of Guildford Baptist Church and is the result of a 10-year long building project which came to a successful conclusion last year. Opening in December 2020 as a community coffee shop, Open Grounds has a full-time manager, but otherwise it is run by volunteer staff.

The church is set back and slightly above the River Wey at Millmead (the “slightly above” part being important since the river has flooded here three times in the 25 years I’ve been in Guildford). Approaching from the river, you reach the church through a large, open space with several low, backless benches dotted around. A central, paved section, flanked by grass and trees on either side, leads to a terrace in front of the church which runs for about half its width on the left-hand side. Access is via a broad flight of steps on the right, or a ramp to the right of that, which runs up from the back.

In due course, you’ll be able to go straight from the top of the stairs and through the doors ahead of you, which lead directly into a large, open foyer with windows on three sides and a skylight towards the back. This magnificent space, which is about as big as the terrace, is home to Open Grounds. For now, however, you have to go via the seating area on the terrace, where you’re greeted by a member of staff. If you’ve come for takeaway, you’ll be sent straight in, otherwise, you’ll be shown to a table and have the procedures (which we’ll come to) explained to you.

There’s plenty of space on the terrace, where you’ll find eight two-person tables neatly laid out. With the exception a single table in the middle, these are around the edges, and, on the two occasions I’ve been, two of the tables have been pushed together to form a single table for four. Take a seat, check in with the NHS App (paper forms are also available) and browse the menu. Once you’ve decided what you want, head inside to order.

At the back of the terrace, the front of Open Ground consists of three broad, floor-to-ceiling windows, the central one of which slides open, letting into the foyer, which is currently clear of seating. Head to the back, beyond the windows, where you’ll find the counter on the left-hand side, the till located in the middle, just past the cakes. Once you’ve ordered, you either wait at the end of the counter, or head back to the terrace by following the arrows on the floor. These lead you around to your right and back on the other side of a chest-high bookshelf (home to Open Grounds’ library) which separates you from the counter.

On both my visits, I had a flat white, made with a single-origin Brazilian from Ethicaladdictions, a new roaster to me, which hails from Gloucestershire. This goes very well with milk, resulting in a classic flat white with chocolate notes. There’s also decaf and filter options from Brighton’s SkyLark Coffee, a relatively new roaster which I first came across at Canopy Coffee. On my second visit, I had a bit more time, so also ordered a brie and cranberry sandwich which I enjoyed while sitting out in the sun.

May 2021: Open Grounds has now re-opened its inside seating area, which you can read about in my Coffee Spot Update. It has also instituted training days on Tuesdays (which started on May 18th) when the café is open, but the staff are trainees, so you are asked to be extra patient.

Liked this? Then take a look at the rest of Guildford’s speciality coffee scene with the Coffee Spot Guide to Guildford.