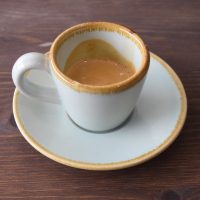 Guildford has another independent speciality coffee shop, and, in keeping with the name, The Hideaway has rather flown under the radar. Well, my radar at least. Tucked away inside the walled gardens of Guildford’s Allen House Grounds, it opened in April this year. I spotted it while walking back from town, but it was only at the start of last week that I popped in for a post-vaccination coffee. I was so impressed that I returned the following day for breakfast!

The Hideaway occupies Allen House Pavilion, looking out over the old bowling green. With shades of another new Guildford opening, Open Grounds Café, there’s a large terrace at the front, with an equally large, spacious interior, although it’s slightly small than Open Grounds. Owned by the Matrix Trust, The Hideaway is a non-profit social enterprise café aimed at giving young people a boost into employment.

That doesn’t mean any corners have been cut when it comes to coffee, with Oxford’s NewGround on espresso, backed up by hot chocolate, chai latte and a range of teas, plus a concise toast- and salad-based brunch menu, complete with daily choice of bread and salad. And, of course, there are plenty of cakes.

One of Guilford’s hidden gems, Allen House Grounds is tucked between the York Road multi-story car park and the Royal Grammar School. Home to tennis/basketball courts at one end, and a bowling green at the other, it’s long been a quiet pedestrian alternative to the upper end of the High Street. It’s equally possible to visit Guildford multiple times and never have known it’s there.

Although the bowling club closed about 10 years ago, Guildford Borough Council maintained the bowling green as part of the park. Now the pavilion, which was the clubhouse, has a new lease of life thanks to the Matrix Trust, which, having previously used it as offices, has added the terrace, transforming it to a wonderful café.

The pavilion is a long, thin, single-storey building at the eastern end of the old bowling green. The equally long and thin terrace is at the front, with a shallow ramp running up from right to left, linking the café with the path along the south side of the green. The door is on the left, at the back of the terrace, opposite the top of the ramp, although when the weather is good, the two large French windows to the right can be opened completely, effectively joining the interior seating with that on the terrace.

Inside, you’ll find a large counter to your left, where you order here at the till on the front left corner. The cakes, meanwhile, are off to your left, with copies of the menu in a basket next to the card reader. You can also check in with the NHS App while you’re ordering, then take a seat and your coffee will be brought to you.

The seating is a moveable feast, depending on whether the doors are open or closed. You can sit on the sunny terrace, with views across the bowling green and glimpses of the Hog’s Back in the distance. A two-person table stands at the top of the ramp, with another tucked around the corner at the opposite end, next to the second of the two French windows. In between, a row of three two-person tables runs along the front of the terrace, while a single four-person table stands at the far end.

The interior is an uncluttered, bright space with simple, white painted walls and a tiled floor, but with plenty of potted plants to prevent it from becoming too austere. There’s a mix of seating, including two four-person tables, four two-person tables, which can be arranged in pairs to make further sets of four, and two large, green sofas. One is at the front, back to the counter with a low coffee table, while the other is in the back, right-hand corner with a pair of armchairs and a low, round coffee table.

A small shelf is hidden behind a pillar to the left as you enter, where you’ll find glasses and bottles of water, which you’re welcome to take to your table, where you’ll also find bottles of hand sanitiser. The coffee, the Big House blend, is from NewGround, which is also a social enterprise, providing employment for ex-offenders. The Hideaway offers a concise espresso-based menu, from which I sampled an espresso and a flat white, both my coffees served in beautiful hand-made cups from Surrey Ceramics.

I started with the flat white, the Big House blend combining well with the milk to produce a smooth, well-balanced coffee with classic chocolate notes. On its own, however, it had a pleasing touch of acidity that I wasn’t expecting. I paired all this with a late breakfast of the avocado toast, a generous helping of spicy avocado on a large single slice of toast, accompanied by a side of bean and chickpea salad.