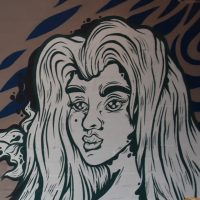 I always feel guilty when, driving along the A5 to/from North Wales, I bypass Oswestry and, in the process, fail to visit Liar Liar. So, at the end of last month, on my way back from Llangollen, I made a point of calling in for a late lunch (my breakfast, which I’d had at Riverbanc, was still going down!) only to discover that since my previous visit, Liar Liar had expanded, more than doubling in size. I don’t know, you turn your back for a minute…

Liar Liar achieved this remarkable feat by taking over parts of the neighbouring building, which the landlord had been using for storage. Taking advantage of the forced closure of indoor seating due to the COVID-19 pandemic, Liar Liar fitted out the building and connected it to its existing space, working around the clock ahead of the relaxation of COVID-19 restrictions in mid-May which allowed Liar Liar to restart indoor service. The finishing touches were put in place late on Sunday night and the doors thrown open on Monday morning.

You can see what I found when I turned up 11 days later after the gallery.

Liar Liar is in the centre of Oswestry, on the corner of Albion Hill/Bailey Street, facing Bailey Head, the town square. For those who knew it before the expansion, it was spread over three floors (the top floor being kitchen/admin/storage space for the in-house catering), However, it was fairly compact, the downstairs seating sharing space with the counter, while upstairs had the feel of a cosy lounge.

At first, little appears to have changed, particularly downstairs, although the seating has been rearranged slightly in the upstairs lounge, the armchairs being replaced with another two-person table. The difference comes with the extension into the building on the left (as you look from the front). An eclectic mix of interconnected spaces has been added, each with its own character. Spread across the first and second floors of the building, they don’t quite line up with the corresponding floors in the original Liar Liar, creating a maze-like extension which only adds to Liar Liar’s quirky nature.

The first thing you notice is a narrow doorway on the left as you head up the stairs towards the first floor. It was always there, only now it’s open, leading you down two steps into the first of the new spaces. Long and thin, it stretches out ahead of you, with the roof sloping down from left to right. Two small windows at far (left-hand) end provide light, while windows and a doorway in back wall (to your right) offer borrowed light from the second space.

There’s a long, eight-person table to your right as you enter, while at the far end, past the doorway to second room, are three more tables, a six-person one extending from the right-hand wall and two four-person ones under the windows in the far wall. Finally, an opening in the front wall leads to a small, windowless nook with wooden box benches around three sides.

Turning right, the open doorway leads down another step into the second space at the back. This has no windows, but is open to the rafters, where multiple skylights make it the brighter of the two rooms. Most of the seating is to your left, with two tables in the middle, a six-person one extending from the front wall and a four-person one from the back. Beyond these, a long box-bench runs along the left-hand wall with two more tables. This time, the four-person table is at the front, while the six-person one is at the back. Finally, an open stairway leads down from the back of the room on the right, with a four-person bar overlooking it.

Wandering down the stairs, you arrive at the downstairs toilet, from where a windowless corridor takes you behind the counter, then returns you to the front room along the right-hand side of the counter. However, that’s not all. Returning up the original staircase to the first-floor landing, you’ll find another addition just before you reach the upstairs lounge. To your right a short, narrow staircase leads up through a door into yet another space, this time at the front of the building. This is the Imitator Bar, Liar Liar’s secret gin bar, which is used as a function room during the day. There’s a well-stocked bar at the front on the left, and a couple of large, communal tables.

Although I was focused on the new spaces, there have been other changes. From Thursday to Saturday, Liar Liar is open in the evenings where, along with the gin bar, the in-house caterer, House of Wingz, takes over. The rest of the time, House of Wingz provides a day-time brunch menu, from which I selected a lovely, toasted bagel with cream cheese, topped by a veritable mountain of mushrooms, which made for a delicious late lunch.

Liar Liar has also simplified its espresso menu, with two choices, the people pleaser (“you are familiar”) and the funky one (“Trust the Process”). Both of these are seasonal single-origins, roasted for Liar Liar by Hundred House Coffee, although I had Hundred House’s Freak & Unique which I spotted on the counter. There was quite a lot I wanted to say about this, so I wrote a separate post about it.