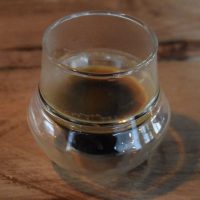 At the end of April, I visited the Hundred House Coffee roastery in the rolling Shropshire hills, coming away with an unexpected present: the last of the second edition of Hundred House’s Freak & Unique. This limited-edition range is designed to showcase the most off-the-wall coffees that Hundred House can find, highlighting the outstanding and abnormal.

The second edition of Freak & Unique was from the farm of Norma Iris Fiallos in Honduras, who used a macerated natural processing technique to produce a coffee which Hundred House gave tasting notes of “tree mastic, aloe vera and pine”. However, when I wrote about it, it was another coffee, from Fazenda Recanto in the Cerrado Minerio region of Brazil, which stole the show.

Not that there was anything wrong with the Freak & Unique. If anything, that was part of the problem. I really liked it, finding it a lovely, drinkable coffee, but not what I’d call “freak” or “unique”. Since I’d only had a small, 80 gram sample, I did wonder if I’d got the best of out it, so when I saw it on the counter at Liar Liar in Oswestry last month, I decided to try it one last time.

You can see what happened after the gallery.

Before we get to my experiences at Liar Liar, a word about my original sampling of the Freak & Unique at home. Part of the problem with only having 80 grams of a coffee is that you have little room for error. In my case, this meant I was able to make, at most, five brews. Matt, from Hundred House, recommended using the V60, which I duly did, but my first brew extracted really quickly and, despite tweaking with the recipe, I never felt that I got the best out of the coffee.

Of course, it’s entirely possible that even with a full 150-gram bag, I’d have ended up with the same results, taste-wise. There was just no way of knowing, since Hundred House had sold out. And that’s why, when I came across the same second edition Freak & Unique at Liar Liar, I really wanted to try it. I figured that Liar Liar would have a decent chance of getting the best out of the coffee and then I’d know how well I’d done.

It was therefore with some trepidation that I poured out the first cupful of my V60 of the Freak & Unique as I sat upstairs in Liar Liar. I was, in some ways, rather relived to discover that it was much as I remembered it from when I made it at home, a perfectly nice cup of coffee but nothing that would inspire me to give it the Freak & Unique tag. So, it seemed that I had got the best out of it after all, although part of me was disappointed that it wasn’t funkier.

However, there was a twist in the tale. A short while later, a really neat double-walled tasting glass arrived at my table with an espresso shot in it. Liar Liar had decided to put the Freak & Unique through the espresso machine. Before I say anything else, I really ought to point out (in Hundred House’s defence) that when I’d asked for advice on making it, Matt had said NOT to use it for espresso and this is probably why…

Had I had the presence of mind, I should have videoed myself drinking that espresso because I don’t have the words to describe the flavours or, frankly, the experience, although I could tell from the way my muscles ached that I had pulled some rather extreme faces. Let’s just say that it was like being punched in the mouth, and not necessarily in a good way!

I still had a few mouthfuls of the pour-over left in the carafe and on trying it again, I could detect the same flavours that I’d experienced in the espresso, only here they were a lot subtler. In comparison, the espresso was an overloaded sensory experience, although it definitely lived up to the Freak & Unique tag!

In closing, I’d like to thank Liar Liar for the experience, Hundred House for sourcing and roasting the coffee and Norma Iris Fiallos, the farmer, for growing it in the first place and being willing to experiment with the macerated natural processing.

If this has wetted your appetite, then the next in the Freak & Unique series is out now. From the farm of Diego Samuel in Colombia, it’s a washed coffee with an extended fermentation stage, the resulting coffee described by Hundred House as tasting of raspberry, lychee and rose water. I can’t wait to try!