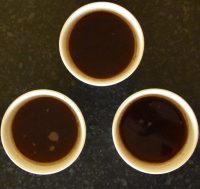 Last month I wrote a post called Freak & Unique (and Other Coffees), featuring the Freak & Unique range from Hundred House Coffee, along with two other coffees that I’d been given when visiting the roastery at the end of April. Originally, I’d intended the post to be mostly about the Freak & Unique, but it was actually another of the coffees, the Fazenda Recanto from Brazil, which is processed using a 64-hour fermentation technique, that became the star of the piece.

One of the interesting things about the Fazenda Recanto was that Hundred House bought it as an exclusive nano-lot along with two other roasters, Crankhouse Coffee and Quarter Horse Coffee Roasters. I really wanted to get my hands on more of the Fazenda Recanto, which is easily my favourite coffee of the year so far, and I was about to buy another bag from Hundred House when I had an idea: why didn’t I get a bag each from Crankhouse and Quarter Horse to see if the roaster made a difference to how the coffee tasted? So that’s what I did, except, of course, like most of my plans, things didn’t quite work out as I’d hoped…

You can see what actually happened after the gallery.

Unfortunately for me, I’m not the only one who thinks highly of the Fazenda Recanto. By the time I’d formulated my plan, Hundred House had already sold out, although that was fine, since I’d kept back some of the coffee from my initial bag. I managed to buy a bag from Quarter Horse, but my luck ran out when it came to Crankhouse Coffee, which had already sold out. Dave, from Crankhouse, very kindly asked around his wholesale customers to see if anyone had any spare, but if they had, they weren’t (very wisely in my opinion) letting on!

So, my plan to compare the three roasters came down to a comparison between two roasters. The first difference I noticed was in the tasting notes, with Hundred House going for “cranberry, bubblegum and glazed doughnut” while Quarter Horse went with “strawberry, coconut, blueberry and kiwi”. But what did I make of it?

I started by making a regular pour-over of the Quarter Horse coffee using my standard V60 recipe, getting the same rich, candy sweetness that I got from the Hundred House (for more about what I made of the Hundred House and more about the coffee itself, check out my original post). In the interests of thoroughness, I also tried the Quarter Horse as an espresso, AeroPress and cafetiere.

Unsurprisingly the AeroPress was closest in taste to the V60, while as a cafetiere, it was still pretty good. In both cases, I got the same underlying candy sweetness, but less pronounced than the V60, so given the choice, I’d always make a V60. As an espresso, I could tell it was the same coffee, but there was a definite aftertaste to it that wasn’t particularly pleasant. Now, admittedly, I hadn’t spent any time dialling it in, but frankly, it tasted so good as a pour-over that I wasn’t inclined to use a lot of (my limited supply of) coffee to see if I could pull a better shot.

I was still curious to see if I could taste a difference between the coffee from the two roasters, so I came up with a plan, which you can read about after the gallery.

To compare the two roasters as fairly as possible, I devised my own version of a triangulation test. This is where you have three bowls of coffee, two of which are the same, the aim being to work out which one is different. This is the basis of the Cup Tasters Championship and the coffee is prepared in a similar manner to a standard cupping.

The trick, when you are on your own, is ensuring that you don’t know which is the odd one out before you do the tasting. My solution was to take four identical containers (old pill boxes) with screw-on lids and mark the inside of the two of the lids with a cross. I then weighed out two lots of coffee from Hundred House and two from Quarter Horse (7.6 grams in each case), putting the lids I’d marked with a cross on the containers with the Hundred House. The last step was to put all four containers in a bag before pulling out three of them at random.

From the outside, the containers looked identical, so all I had to do was prepare my cupping bowls, ensuring that I kept each lid (face down of course!) next to the corresponding bowl. Then I slurped, trying to decide which was the odd one out. To be honest, they all tasted the same to me. I ended up picking one, but it was purely guesswork, so I wasn’t surprised when I turned the lids over to reveal that I’d got the wrong one.

What was interesting is that when the coffee was brewing, there was a clear odd one out visually. Two of the bowls had thick crusts, while in the third, the coffee quickly fell to the bottom. This turned out to be the Hundred House, while the other two were from Quarter Horse. The difference between the two (and, I suspect, the reason for the difference in the appearance) is freshness. The Hundred House was about six weeks after roasting, while the Quarter Horse had only been roasted two weeks before. Not that I could tell any difference in the taste!

In conclusion, my notoriously undiscerning palate couldn’t tell the difference between the two, which in many ways was reassuring. The Fazenda Recanto nano-lot is an outstanding coffee and I think that both Hundred House and Quarter Horse got the best out of it with their respective roastings. It’s just a shame I couldn’t try the Crankhouse as well!

If you are interested if different processing techniques, although I couldn’t get any Fazenda Recanto from Crankhouse, I did spot three very interesting coffees on the Crankhouse website, so I bought those instead. Check out what I made of them, including one that tasted of cinnamon!

5 thoughts on “Fazenda Recanto: A Tale of Two Roasters”