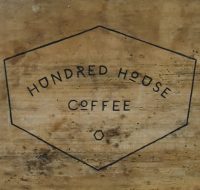 I first came across Hundred House Coffee at the Manchester Coffee Festival in 2017 and, ever since, I’ve looked forward to meeting up with Annabelle and Matt, Hundred House’s founders, at festivals around the country. I’ve had a long-standing invitation to visit the roastery, but first my foreign travel and then the COVID-19 pandemic kept me from taking them up on the offer. That, and, of course, getting there: the roastery is an old farm building in rural Shropshire, literally miles from anywhere, including the nearest train station. However, at the end of last week, and with access to a car, I made a point of calling in.

Hundred House made its name by roasting some, quite frankly, amazing coffee, producing a small selection of seasonal blends and single-origins. Unusually for a coffee company, Hundred House’s focus is as much on design as it is on coffee, Matt and Annabelle having collaborated with a range of artists to produce some outstanding packaging. This remains a focus to this day through the Art & Industry project. Looking to the future, next year Hundred House is moving to a purpose-built redevelopment north of Ludlow, which includes plans for an onsite coffee shop.

You can see what else Hundred House is up to after the gallery.

Hundred House Coffee occupies half of an old, stone farm building in the rolling Shropshire hills, a location which vies with Carvetii Coffee for the title of “Coffee Roastery with the Most Beautiful Setting” (Surrey Hills Coffee and Chimney Fire Coffee, both of which are within walking distance of my house, are also in the frame). Although I’ve visited smaller roasteries, it’s not a large space, with the 12 kg Diedrich roaster and coffee store at one end, while the other end is split between the office and lab/work area with the obligatory espresso machines and grinders.

This has been Hundred House’s home since Matt and Annabelle started it in 2016, but it is steadily outgrowing the space, hence next year’s move. This will see Hundred House become one of the founding tenants of SY8 Studios, a set of units for creative makers and producers to be housed in converted Victorian cowsheds north of Ludlow. This should be (marginally) easier to get to and, with plans for an onsite coffee shop, well worth visiting.

In the meantime, Hundred House continues in its current home, producing some outstanding coffee. I first fell in love with Hundred House’s coffee when I tried the Bon Bon espresso blend at our first meeting at the Manchester Coffee Festival. With signature tasting notes of “sweet and jammy”, it proved to be just that and was especially impressive in milk, despite Hundred House having its Coco blend, which is designed for milk (and is just as good). There’s also an organic espresso blend, Vida, a low caffeine blend, Nom Nom, and a Colombian Sugarcane EA decaf.

I’ve tried all of them over the years, either at home or in coffee shops, and have never failed to be impressed. While I was there, Matt made me a flat white which was outstanding, so rich and sweet that I was convinced it was the Coco, only to discover that it had been made with the Nom Nom!

The other string to Hundred House’s (coffee) bow is its single-origins, with typically five or six in stock at any one time. Perhaps most interesting in all of these is the new Freak & Unique range, which showcases the most off-the-wall coffees that Hundred House can find. Not for the faint-hearted, there have been two Freak & Unique coffees so far. The first was a Geisha from Diego Samuel in Colombia, while the second, a macerated natural from Norma Iris Fiallos in Honduras, has just sold out. However, I managed to come away with a small sample, the last of the last, which features in its own Saturday Supplement and generated another one after I tried it as both a V60 and an espresso, at Liar Liar in Oswestry..

Freak & Unique comes with its own range of limited-edition artwork by Toucan Tango, a screen-printing duo from the Wirral (who also have an art café, SUP, in New Brighton). This continues a long line of collaborations with artists and designers, going right back to the initial packaging for the single-origins, designed by Atelier Dyakova. More recently, Hundred House has worked with Studio Hyte and Lewis Heriz on other packaging and limited edition artwork, which you can buy from the Hundred House webshop.

This reflects Annabelle’s design background, something she continues in her work with two local schools. The latest project involved the students designing V60 stands which they hope to have produced by a local foundry. Talking of which, Hundred House has also collaborated with local ceramicist, Isatu Hyde, who has produced a set of handmade, Kalita-style drippers with matching crockery (again available through Hundred House webshop).

And that’s Hundred House, so much more than a coffee roaster!

December 2021: Hundred House has won both the 2021 Best Filter Coffee Award (for its Fazenda Recanto coffee) and the Best Roaster/Retailer Award.