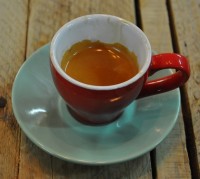 Another Shrewsbury gem, I discovered The Bird’s Nest thanks to the talented Cherie Jerrard. I’d come to see Cherie Did This, an exhibition of Cherie’s fascinating café illustrations at the Shrewsbury Coffeehouse. Afterwards, we met up for another tour of some of Cherie’s favourite Shrewsbury coffee shops.

The Bird’s Nest is in Shrewsbury’s Market Hall, which was built in 1965 (making it slightly older than me!) and is out of keeping with everything around it. However, its unappealing concrete exterior hides a delightful interior, particularly when you get to the back of the second floor, which is where you’ll find The Bird’s Nest, surrounded by market stalls.

It’s an interesting space, full of an eclectic mix of furniture. If I said it felt a little like sitting in a vintage store, I’d mean it in a nice way. The layout’s wonderfully confusing, with the kitchen in one corner, the coffee counter in the opposite corner and various other bits and pieces scattered around the edges. Not that any of this matters since there’s full table service. There’s a fairly standard espresso menu based around the Bon Bon blend from Hundred House, bags of cake and, if you don’t arrive after the kitchen’s closed, full breakfast and lunch menus.

There are a couple of ways into the Market Hall. The main entrance, at the building’s eastern end, requires you to walk the length of the market to reach The Bird’s Nest, itself no bad thing. Alternatively, if you enter at the back (the western end) you can go straight up two flights of stairs, turn left and you’re there. Regardless of how you get there, The Bird’s Nest feels like an integral part of the market. One minute you’re walking along a row of market stalls and the next, there are the tables, booths and sofas that make up The Bird’s Nest’s seating area.

Occupying roughly a square at the back of the market, The Bird’s Nest is literally surrounded stalls. For example, there’s a barbers in the corner on the right and at the back is an arts/gifts stall. The Bird’s Nest itself makes use of this space around the edge, with its kitchen in the corner at the back on the left-hand side, while there’s a separate station for the dishes on the front at the left, a smooth/juice bar in between. Meanwhile, the stylish coffee counter is on the right, facing the front if you come through the market.

Since The Bird’s Nest offers full table service, just grab a seat when you’re ready. The seating is eclectic and perhaps the Bird’s Nest’s greatest draw. Unless it’s really busy, you should be able to find something to meet your tastes. Maybe one of the two booths to the right of the coffee counter appeal to you, with their bright-blue upholstered bench seats. Alternatively, there’s another one just past the coffee counter on the left. Or perhaps you want to spread out in the cosy corner, with its pair of very welcoming grey sofas, coffee table and armchair. There are a couple of long, communal tables, with seating provided by benches, and a pair of more traditional tables with chairs. Finally, there’s an old cable reel that’s been pressed into service as a table over by the kitchen.

I was there late one afternoon, after the kitchen had closed. I really liked the relaxed atmosphere as the market wound down and found the décor to be an interesting combination of vintage and rustic, with a couple of hipster elements thrown in. One of these is the lighting, a combination of low-hanging, bare light bulbs which are lovely to look at, but a bit of hazard when you are my height. You would think that I’d see the damn things, being all bright and shiny, but I had near misses on two occasions!

When I visited in 2016, The Bird’s Nest used Bradford-based Limini, a roaster which I first came across in Brewsmiths in Birmingham, but has since then it’s moved to Hundred House and its Bon Bon blend. Limini provided a bespoke seasonal espresso blend for The Bird’s Nest, consisting of beans from Brazil, Costa Rica and Sumatra. I tried it as an espresso and while slightly darker than some third-wave aficionados would prefer, nevertheless I found it to be a well-balanced cup, smooth and with a little hint of bitterness that I enjoyed. Cherie had (what she described as) a very nice matcha latte, but we sadly weren’t able to sample the plentiful cake selection, all of which looked lovely.

2 thoughts on “The Bird’s Nest”