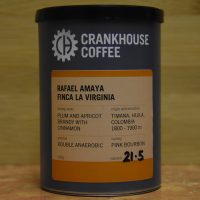 The Coffee Spot has always been more about places I like to have coffee than about the coffee itself, so I find it amusing that today’s Saturday Supplement is the fourth about coffee in a month! This can be traced back to the Freak & Unique that I received from Hundred House Coffee, the gift that keeps on giving. Along with the Freak & Unique, which spawned a second post when I tried it at Liar Liar, I received a bag of Fazenda Recanto, a coffee from the Cerrado Minerio region of Brazil, which is processed using a 64-hour fermentation technique.

The Fazenda Recanto was a nano-lot which Hundred House bought in conjunction with Crankhouse Coffee and Quarter Horse Coffee Roasters. I was trying to buy a bag from each roaster so that I could compare all three, but sadly, Crankhouse had sold out. However, while I was looking around the Crankhouse website, I came across three other very special coffees which caught my eye. All three coffees were processed, like the Fazenda Recanto, with various fermentation techniques, so I decided to buy them instead.

As with the Freak & Unique and other coffees from Hundred House, I didn’t try cupping the three coffees from Crankhouse since they are all very different. Instead, I’ve been making them as regular pour-overs during the last two weeks and taking notes as I go. All three are micro-lots and, rather than using the standard processing techniques, each one uses a fermentation phase (or two) to develop the coffee’s sweetness and acidity, while one also added flavours during the fermentation.

Since they are effectively limited editions, Crankhouse sells the coffee in 150g tins rather than the standard 250g bag. They come at a premium (from £11.00 to £14.50), which reflects their rarity, but you do get the added bonus of a neat, reusable tin at the end of the day. I want to stress that all three coffees were excellent, although I suspect that their finer points were lost on my notoriously undiscerning palate!

For each one, I give a short description of the processing technique (drawn from the Crankhouse website) and then tell you what I made of it, starting with the Finca Santa Rosa, followed by the Finca Santa Monica and then the Finca La Virginia (these are the names of the farms, by the way, “finca” meaning “farm” or “estate” in Spanish).

Let’s start with the Finca Santa Rosa, which is in the Imbabura Province in northern Ecuador. The farmer, Galo Semblantes, only started growing coffee in 2014 and has just nine hectares under production. Of this, most goes through a traditional washing process, but a small amount is held back to undergo a double fermentation process instead.

After picking, the fresh coffee cherries are placed in a sealed fermentation tank for 48 hours (or until the pH, a measure of the acidity, reaches 4.1). The cherries are then depulped (the outer layers of the fruit are removed) and placed in open tanks for a second 48-hour fermentation (or until the pH reaches 3.7). After the end of the second fermentation, the coffee is washed and left to dry, which is typical for washed coffees.

I tried the Finca Santa Rosa first because the processing sounded very similar to the 64-hour fermentation used by the Fazenda Recanto, which I adored. Although the Finca Santa Rosa was a lovely coffee, it lacked the candy sweetness that I so loved in the Fazenda Recanto. That hasn’t stopped me from enjoying it as my daily pour-over for the best part of a week though!

Moving from Ecuador to Colombia, the next coffee is from Finca Santa Monica in the Quindio region. The farmer, Jairo Arcila, sends the coffee cherries for this micro-lot direct to the La Pradera mill, which is owned by the exporter, Cofinet. Here they undergo a 48-hour dry anaerobic fermentation (that is, they are fermented in the absence of oxygen and water). The unique step here is that tartaric acid and cinnamon are added to the fermentation sacks. Following fermentation, the coffee is then depulped and processed using a tradition honey processing technique.

The Finca Santa Monica is definitely an “oh wow” coffee, right from the moment you take the lid off the tin, when you can smell the cinnamon, the coffee having picked up the flavour during the fermentation stage. This is even more pronounced once the coffee is ground and I worried that it would be overpowering in the brewed coffee, but my fears were unfounded. Instead, there is a subtle undercurrent of cinnamon, which is certainly a first for me.

The last of the three coffees is also from Colombia, Finca La Virginia being located in the Huila region. Rafael Amaya has been growing coffee here for 20 years, but only moved into speciality coffee in 2015, when he began experimenting with fermentation during processing. Like Galo Semblantes (Finca Santa Rosa), this is a double-fermented coffee, but both stages are anaerobic and the coffee is fermented for much longer.

After picking, this micro-lot is fermented for 100 hours in sealed sacks before being depulped and subject to a second anaerobic fermentation, this time for 40 hours (or until Rafael considers that the remaining mucilage, which surrounds the coffee beans, “tastes like over-ripe orange”). The coffee is then washed and left to dry, which is typical for washed coffees.

This is easily my favourite of the three, with a subtle, caramel sweetness to it that I really enjoyed, although the tasting notes are “plum and apricot brandy with cinnamon” (none of which I got!).

In conclusion, I really enjoyed all three coffees and am very glad I tried them. The Finca Santa Rosa and Finca La Virginia have both been staples of my daily pour-over for the last couple of weeks, although I must confess to struggling a little with the Finca Santa Monica. Occasionally my readers conflate my not liking something to that thing being “bad”, so I want to stress that my struggles were entirely down to my realisation that I am not a fan of my coffee tasting of cinnamon!

If I’ve inspired you to try any of these coffees, then please note that at the time of writing, both the Finca La Virginia and Finca Santa Monica have sold out. Such is the way with micro-lots. However, you can still get 150g tins of the Finca Santa Rosa.

December 2021: Three Micro-lots from Crankhouse was a runner-up for the 2021 Best Saturday Supplement Award.

3 thoughts on “Three Micro-lots from Crankhouse”