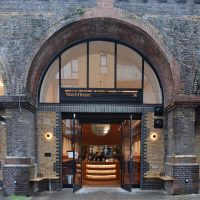 WatchHouse, the Bermondsey coffee powerhouse, has come a long way since it opened its doors in the eponymous WatchHouse on Bermondsey Street back in 2014. These days there are seven WatchHouses, two in close proximity to Bermondsey original, south of the Thames, and another four over the river, including the one-time Brooklyn Coffee (now WatchHouse Spitalfields) and Somerset House (once occupied by Fernandez & Wells).

For many years, WatchHouse used Ozone, but along with its expansion came the decision to roast its own coffee, WatchHouse opening a dedicated roastery and café (the subject of today’s Coffee Spot) in a railway arch on Maltby Street in August 2020. Now all the coffee is roasted here on a re-built 1959 Probat UG22, which you can admire through the glass wall at the back of the café.

WatchHouse’s offering is fairly simple, with a concise espresso-based menu plus batch-brew and pour-over. The latter offers a choice of a single-origin from WatchHouse or a guest roaster, which, during my visit, was from Monogram in Calgary, the options changing every month. This is backed up with a selection of Good & Proper Tea, hot chocolate and, if you’re hungry, a range of cakes and savoury options.

A gentle, 10-minute stroll from the original WatchHouse brings you to Maltby Street on the southern side of the railway heading into London Bridge station, which stands a little way off at the top of Bermondsey Street. The trains run well above street level, supported by a series of massive brick arches which are now home to a variety of businesses, including the new WatchHouse Roastery & Café.

Railway arches vary considerably in size, so let’s start by saying that these are huge. Around the height of a two-storey house, they only stretch back to half the depth (there are units under the arches on the other side too). However, since the railway is 11 lines wide at this point, the space still goes a long way back, allowing it to accommodate the café at the front, the roastery at the back, and, above the roastery, offices and meeting rooms.

WatchHouse cuts a striking figure from the street, with a pair of tall, glass doors inset between two projecting brick pillars, which support the semi-circular brick arch. Outside seating is limited to a pair of short, L-shaped benches, one on either side of the doors, tucked inside the projecting pillars. Each can seat two, one per side, an armrest with two built-in cup holders at 45° in the middle.

Inside, the layout in strikingly simple. A central island counter runs front-to-back, with a curved end facing the front. This curved section houses the pour-over station, Kinto drippers to the fore, while to the left is the espresso station, three Modbar group heads rising from the counter. Meanwhile, on the right, is the till, where you order, followed by cakes and a selection of savoury wraps and sandwiches.

Seating is provided along both sides of the arch, where long bars run from the doors at the front to the glass wall at the back. For now, seating is limited to eight bar stools on either side, but once social distancing restrictions have been lifted, there’s space for at least twice that number. Each bar is generously provisioned with modern power outlets (three-pin plugs and USB) and hooks for bags and coats. Finally, a head-high shelf runs above each bar, with retail bags of coffee, boxes of tea and various bits of coffee kit for you to peruse.

WatchHouse uses its 1829, a naturally-processed single-origin from Brazil, on espresso, while the pour-over options are displayed on the counter, next to the Kinto drippers. There’s a single-origin from WatchHouse, plus what’s termed the “Companion Coffee”, newly-introduced in June. This is a carefully-selected coffee from another roaster, which was, during my visit, the Luis Choquehuanca Lot 1, an anaerobic processed coffee from Bolivia, roasted by Monogram in Calgary.

I’d come to WatchHouse to meet Bex, Bermondsey local and coffee blogger extraordinaire, who’d first alerted me to the new roastery and café when she wrote about it last summer. We caught up over lunch, Bex having a falafel wrap, while I had the sweetcorn and Mexicana cheese fritter bun with haloumi and spinach (served hot), which was excellent.

I paired this with a flat white, the 1829 going superbly well with the milk, for a rich, smooth coffee with classic notes of nuts and chocolate. Bex, meanwhile, had the Companion Coffee, our drinks arriving on a neat wooden tray, complete with information cards for each coffee. Had I been paying attention, I would have asked Bex what she made of it, but I wasn’t, so I’m hoping that she’ll read this and let us know in the comments below!

December 2021: WatchHouse Roastery & Café was a runner-up for the 2021 Best Physical Space Award.