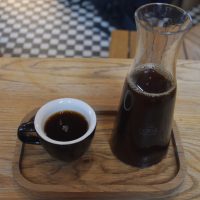 WatchHouse, on London’s Bermondsey Street, south of the river, is one of those “new” coffee shops (like Lundenwic and The Black Penny) which I’m embarrassed to say has been open for several years. In the case of WatchHouse, it will be four this September (and has also opened two further locations!). In my defence, while I come into London via Waterloo, I rarely spend any time south of the river, which, if it has more gems like this, is entirely my loss.

WatchHouse is housed in a small, octagonal building dating from the 19th century, which was built to house the watchmen looking after the neighbouring church (hence the name, WatchHouse). It’s a gorgeous physical space, if, like me, you like old buildings, reminding me a little of York’s Perky Peacock, another coffee shop housed in an old tower.

The coffee is as gorgeous as the surroundings, with the Empire blend from Ozone on espresso, where it’s joined by three single-origins on batch-brew, which change on a weekly basis. If you’re hungry, there’s breakfast, lunch and plenty of cake, with bread from two local bakeries, WatchHouse supporting various local suppliers.

August 2020: WatchHouse now roasts all its own coffee from a dedicated roastery and café in a railway arch on Maltby Street, which I visited in June 2021. It’s also opened another three coffee shops, bringing the total to seven (including the original and the roastery/café). I’ve also updated this post from “The Watch House” to “WatchHouse” to reflect the new branding.

WatchHouse is towards the southern end of Bermondsey Street, at its junction with Abbey Street, standing on the corner of St Mary Magdalen churchyard, a lovely, green space. The small, single-storey octagonal building can best be described as lozenge-shaped, with long front and back walls and three short walls at either end, making it maybe three times as wide as it is deep. Brick-built, it still retains its original chimney and inside, it’s open to the rafters of the A-frame roof.

The only entrance, a pair of narrow, glass double doors, is in the middle of the front wall, with a single large window high up in each of the end walls at the front. There are also a few smaller windows dotted around, which provided a surprising amount of light on the sunny afternoon when I was there.

There’s an L-shaped counter which occupies the whole of the left-hand end, starting immediately to the left of the door and running along the whole back wall, ending at the chimney breast which is at the right-hand end of the back wall. The only seating is on the right, where a built-in wooden bench seating runs around the three end walls from the door to the chimney. There are two-person tables at each end and, in the middle, effectively three tables in one, following the angles of the wall. Additional seating is provided by boxes at each table, all of which double as storage space, the seat lids hinging open to reveal various goodies inside. Indeed, WatchHouse is adept at making the most of what little space it has, the counter-front being pressed into action, housing rows of retail shelves.

Talking of space, laptops are allowed during the week, but not at weekends and, while there’s no convention power outlets, there are pairs of USB charging points, two for each of the five seats around the right-hand end.

When it comes to coffee, WatchHouse uses local roasters, Ozone, with the Empire Blend on espresso, serving a fairly standard menu. WatchHouse, like many London cafes, has done away with pour-over, serving batch-brew filter instead. However, what’s unusual is that three single-origins are offered rather than the more usual one, with the options changing every week or so.

While I was there, the choices were a Brazilian (pulped natural), a Burundi (washed) and an Ethiopian (natural). The barista let me try all three, giving me little samples in an espresso cup. Of these, the Ethiopian Ardi was by far my favourite, leaping out at me, so I ordered that, which was served in narrow carafe, cup on the side (I reused the espresso cup I’d used for tasting), all presented on a small wooden tray.

I can’t say enough about the Ardi. It’s a wonderful coffee, really bursting with flavour. Rich and fruity, it was everything that I expect a good naturally-processed coffee to be and it was still gorgeous when it was cold. It also serves as a reminder against my ingrained prejudice that batch-brew can’t be as good as hand-pour, which is just not the case. This was as good as anything I could have made for myself.

I paired this with a Hazelnut Brownie, an equally-wonderful cake, gorgeous, rich, and gooey. Perfect.

December 2018: WatchHouse, Bermondsey was a runner-up for the 2018 Best Filter Coffee Award.