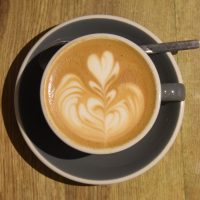 Lundenwic is one of those places that I’ve been meaning to visit ever since it opened. Back in 2015… In my defence, I’ve been a couple of times, but each time it’s been so busy that it’s been impossible to photograph, so I quietly left, telling myself I’d be back another day. That day eventually came one rainy Saturday evening in May when all the sensible people had gone home…

Located in the heart of the London’s theatre-land, right on Aldwych, at the foot Drury Lane, Lundenwic brings speciality coffee to a very mainstream setting. The shop itself is narrow and weirdly-shaped, with not one, but two (sort of) basements, exactly the sort of place I revel in. I must admonish my previous self for not going back sooner.

When it comes to coffee, Lundenwic keeps things simple but classy. Assembly’s seasonal espresso (currently a washed Colombian) is joined by Square Mile’s seasonal decaf (currently a blend of 80% Colombian and 20% Kenyan), while Assembly and Square Mile take it in turns on the batch-brew filter, the coffee changing roughly every week. A similar approach is taken with the food, a concise all-day brunch menu joined by soup at lunchtime.

Aldwych, that strange, curved section of road running along the eastern end of the Strand, is home to the London School of Economics, two theatres and a very posh hotel. And, tucked away behind a very narrow, blink-and-you’ll-miss-it storefront, there’s Lundenwic, named after the Anglo-Saxon settlement that occupied this area in the 7th Century.

From the outside, there’s very little to Lundenwic, just a square window beneath a blue awning, a pair of glass double doors in the centre, which most folk (myself included on too many occasions) hurry past. There are two small tables, one on either side of the door, if you want to brave the pedestrians and the roar of the buses, although the pavement is wide enough that you are fairly sheltered from both.

Inside, it is very narrow, the width extending no more than the windows, although the soaring ceilings (it’s probably as tall as it is wide) prevent Lundenwic from being too claustrophobic. It’s a weird shape though, probably the weirdest shape of any coffee shop I’ve visited since Canopy opened in my home town of Guildford. Most coffee shops would be content on running straight back, but not Lundenwic, which has a kink to the left, one third of the way back, so that the rest of the shop is at maybe 20⁰ to the front. It also feels slightly wider at the back.

There’s just enough space for the counter, which runs almost the full length of the left-hand wall, cake and toasties first, then till, and finally, at the back, the espresso machine. To your right as you enter is a tall chiller cabinet, an equally tall, narrow set of retail shelves, and then, after the kink, a flight of stairs leading down to the basement. The only upstairs seating is at the back, where a three-person table sits beyond the stairs, opposite espresso machine, while right at the back, a narrow bar runs along back wall beneath a solitary, tall, narrow window.

Downstairs, the stairs, straight and steep, deposit you at the back, where there’s a door to the kitchen. Doubling back on yourself to the left, you’ll find a basement, roughly mirroring the upstairs. Wooden benches line the walls on both sides, with one two-person table followed by two two-person tables pushed together to form a set of four.

However, that’s not all. Through a gap in the front wall, a small flight of steps leads down to a low, vaulted cellar that extends out under the pavement. There’s more seating down here, with two armchairs to your left, another pair against front wall, and a four-person table on the right (again consisting of two two-person tables).

It was early evening and, having recently tried Assembly’s seasonal espresso at Over Under Coffee, I opted for Square Mile’s decaf in a flat white (it was either that or a batch-brew of a Brazilian Rainha, also from Square Mile). This proved to be well-chosen, the coffee going really well with milk to provide a rich and creamy flat white. It’s an excellent coffee, which I’m currently enjoying at home, having picked up a bag at last month’s London Coffee Festival.

Lundenwic has an all-day brunch menu, with soup and specials at lunch, while a couple of breakfast items (porridge and eggs on sourdough) drop off the menu at 11:30. On a previous visit I’d had the excellent avocado and halloumi on sourdough, while this time around I went for a caramelised onion, kale and cheddar toastie. This was superb, with mature, tangy cheese and tasty, crispy sourdough bread. Perfect.