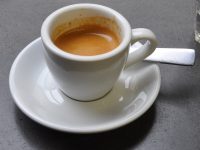 Brooklyn Coffee, on the busy Commercial Street in the heart of Shoreditch, has been around for just over three years. During that time, plenty of people have sung its praises and, while I’ve called in a few times, I’ve never been in a position to write it up for the Coffee Spot. Until a fortnight ago, that is.

Brooklyn Coffee is, as the one-word A-board outside clearly states, all about the coffee. Admittedly, there’s a limited breakfast menu, a reasonable selection of cakes, cookies and pastries, plus beer straight from the fridge, but it’s the coffee, from local roasters, Caravan, that takes centre stage. Not that Brooklyn Coffee aims to dazzle you with variety: there’s one option (blend or single-origin) on espresso, with decaf on the second grinder, while filter drinkers have a single-origin available on bulk-brew. Finally, Caravan’s Special Bru blend makes an appearance for the iced coffee.

June 2019: Brooklyn Coffee has been taken over by WatchHouse to become WatchHouse Spitalfields. Thanks to Phil Wain for the heads up.

Brooklyn Coffee’s pretty much a what-you-see-is-what-you-get sort of place. The simple façade on Commercial Street hides no secrets, the generous windows on either side of the slightly-recessed door seeing to that. If you want to sit outside on the busy pavement, there’s a solitary bench in front of the left-hand window, but honestly, the two window-bars inside are far better for people-watching. For one thing, the sound-track (usually of 1970s/80s rock and punk) is far better than the constant roar of buses pulling away from the stop just outside Brooklyn Coffee.

Brooklyn Coffee seats six, three to each window-bar. Despite this, it’s fairly spacious inside, with plenty of room between the seating and the counter at the back. A large, uncluttered affair it has the espresso machine on the left, cakes to the right, and till in the centre. A large alcove on the right-hand side houses the fridge for the beer, while the bulk-brewer’s tucked away in a corner. All told, it’s an efficient, well-run operation, turning out consistently high-quality coffee to a predominantly to-go market.

It’s a cosmopolitan place, named “Brooklyn Coffee” in honour of one half of the owners, a Brooklyn native. The owners generally don’t work weekends and on the Sunday of my visit, I had a Spanish barista and a British server (Sam). Staff go a long way to making (or breaking) a place and these two, it had to be said, were excellent.

I’ve long been a fan of Caravan’s coffee so knew I was in safe hands. The espresso, which changes every six weeks or so, was the Daily Blend (Brooklyn Coffee also runs single-origins on espresso).  I tried straight up, finding it a bright, fruity espresso, with very much a front-of-the-mouth feel to it. With complex, rounded flavours, it definitely didn’t disappoint.

If you want filter coffee (or can’t wait for an espresso-based drink), Brooklyn Coffee offers a single-origin which changes very week on bulk-brew (or “drip” as the menu refers to it, with a nod to Brooklyn Coffee’s American roots). Finally, there’s an iced coffee option, using Caravan’s Special Bru filter-blend.