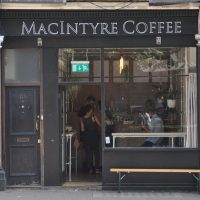 MacIntyre Coffee, on St John Street, just south of the Angel tube station, is the permanent home of what was originally a pop-up in Shoreditch, followed by another at Old Street Roundabout. Heritage aside, what makes MacIntyre stand out from the crowd is the equipment: home to one of (I believe) just four Modbar espresso and steam installations in London, it’s also the only UK speciality coffee shop that I know of which uses the Alpha Dominche Steampunk machine for filter coffee and tea.

There’s not a lot to MacIntyre, just a simple rectangular layout, window at the front, counter at the back, seating at bar along the right-hand side, all of which puts the focus firmly on the coffee, which is supplied by Modern Standard. There’s a single-origin on espresso and another through the Steampunk, the grinding done on demand by the ubiquitous EK-43. The options change every week or two, while there’s a wider selection of beans for sale.

The coffee is backed up with a selection of breakfast options baked on-site. There are pastries, cookies and sandwiches, most of which are gone by lunchtime, plus Mörk hot chocolate from Australia and an interesting selection of loose-leaf tea.

I came across the original MacIntyre Coffee in Shoreditch. Back then it had a very temporary feel, but, as it turned out, it was even more temporary than anyone thought. I made my notes, took my pictures and, a few weeks later, just as I was about to write it up and publish it, an insurance company bought the building and booted out everyone, MacIntyre included, with something like ten days’ notice! The new MacIntyre has a more permanent feel about it, but nevertheless I approached it with more than a little trepidation. If this one shuts unexpectedly, I think I shall stop visiting…

MacIntyre Coffee occupies a high-profile spot, just south of the Angel crossroads, near the likes of Saint Espresso and the original Coffee Works Project. On the east side of the street, it catches both the eye and the sun, particularly in the afternoon. The layout’s very simple, just a rectangle, narrow side facing the street. The door’s on the left, with a window to the right and a bench out front on the pavement of the (very) busy street.

Inside, the counter occupies the back of the store, while seating is at a simple scaffolding-built bar running along the window and up the right-hand side of the store. You can fit a couple of people in the window and maybe six along the wall. The left-hand wall has been kept free of seating, instead housing a shelf with the pastries and sandwiches. It’s a bright, uncluttered space, with plenty of natural light from the generous window, supplemented by long bulbs which hang vertically from the high ceiling, along with several pot plants.

The counter’s given over almost exclusively to the coffee/tea side of the operation, with even the till, a neat tablet-based system, relegated to the counter’s far left-hand side. First comes the twin Steampunk machines, with the left-hand one dedicated to tea, the other to coffee. If you’ve not come across one before, it’s a fully-programmable, automated filter coffee (and tea) machine. I first ran into one at La Colombe in Philadelphia, enjoying a full demo a few months later from Alpha Dominche at the 2014 London Coffee Festival.

To the Steampunk’s right is the Modbar, two gleaming group heads rising out of the counter. Between these and the twin columns of the Steampunk is a solitary steam wand. I did ask why MacIntyre hadn’t gone the whole hog and installed Modbar’s pour-over module: the answer is that the Steampunk’s greater automation won the day. Finally, at the far right-hand end, is the ubiquitous EK-43 which does all the grinding for both espresso and filter, along with a neat system for holding the portafilters when they are not in use.

Having recently experienced the Modbar in action at Modern Society and before that at Gracenote, I decided to put the Steampunk through its paces. The coffee on offer was a washed Ethiopian, which wouldn’t necessarily have been my choice. The Steampunk uses a metal filter which gives the coffee more body, but also less clarity, which, I felt, robbed the Ethiopian of its delicate notes. The coffee was also very hot, so I had to let it cool down for a long while before drinking.

There was nothing wrong with the resulting cup, but it didn’t particularly wow me. On the plus side, the Steampunk really is fully automated. To make a pour-over would have taken a dedicated barista for four/five minutes, but the Steampunk did it all by itself, freeing the barista to serve several other customers, which is just as well since it was very busy.