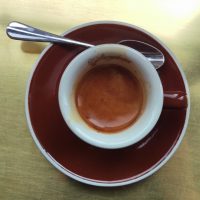 Stumptown, just off the lobby of Ace Hotel in New York City, is one of NYC’s most popular coffee venues, the queues frequently extending into (and around) the lobby. I first visited in 2013, meeting up with Greg of CoffeeGuru App, but it was another three years before I returned on a “quiet” day to do a write-up.

As a coffee shop, there’s not a lot to it, although, like most Stumptown places, it’s sumptuously-appointed. In this case, a single bar runs along the window at the front, the counter running parallel to it at the back, with just enough space between them for customers to queue/wait to collect their coffee. Alternatively, you can sit in the atmospheric lobby of the Ace Hotel itself (if you can find a seat, that is). Stumptown’s Hairbender blend is on espresso, and a single-origin on bulk-brew, with both cold-brew and nitro on draft.

You can treat Stumptown just as a coffee shop, using the glass door to the left of main hotel entrance. In winter, this leads through the obligatory airlock system, up a short ramp and directly into the coffee shop itself, where you find yourself at the far (right-hand) end of the counter. Alternatively, go through the main doors, up a short flight of steps and into the atmospheric lobby, with its low-level lighting and big squares of comfy sofas. To get to Stumptown, double back on yourself to the left, where a door leads to the end of the counter, opposite the street entrance. However, you may not have much choice. When it’s busy, the queue usually extends into the lobby, so you’ll end up there regardless of which door you use.

The layout’s simple. The counter runs along the back, a busy space, with baristas in constant action. It’s centred on the till, which is right in the middle, in front of a mirror on the wall behind the counter, above which is the menu. Order here, then mill around, trying not to get in the way, while waiting for your coffee. If you’ve ordered drip, you’ll be quickly on your way, the flasks conveniently located directly behind the till. Alternatively, your coffee could come from one of two espresso machines, one immediately to the left of the till, the other at 90 degrees at the right-hand end of the counter, where the queue snakes past before disappearing into the lobby. It’s sufficiently busy that both are in constant use.

Having collected your coffee, there’s a choice. You can stand at the narrow bar in the window, where, at the far left-hand end and with the correct angle, there’s a view of the Empire State Building. Failing that, take your coffee and head into the lobby, where there are plenty of sofas. However, be warned: I thought the bar was crowded until I went into the lobby where there wasn’t a seat to be had. It was laptop central, with at least two-thirds of the people working quietly away on laptops. It felt a bit like a library with very comfortable chairs!

Stumptown has its seasonal Hairbender blend on espresso, with a single-origin on bulk-brew: no guest espressos or pour-overs here. I had a nicely pulled and well-presented espresso in one of Stumptown’s awesome cups. However, it was a little too fruity for my tastes, much as I recall it during my first visit back in 2013.