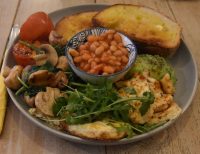 Ever since opening in 2014, Little Yellow Pig has been something of an institution in Hoole, Chester. Initially a small coffee shop, it expanded into the adjoining space. Now it’s expanded again, adding a second location in the narrow streets of Nantwich town centre. Opening in August last year, the new location is a cosy little spot, with an L-shaped seating area that holds 16 people at most. While it has more traditional coffee shop furnishings (lacking the mismatched tables and armchairs of the original), anyone familiar with Little Yellow Pig in Hoole will immediately feel at home with the quirky décor and eclectic posters on the wall, including Mr Little Yellow Pig himself.

There’s a standard espresso-based menu, with Hundred House‘s seasonal Bon Bon blend from in the hopper. There are also bags of coffee for sale, either whole bean or pre-ground. However, the real draw is the food, all cooked in the kitchen at the back, with separate breakfast, brunch and lunch options, backed up with a small selection of cakes. Take a seat, have a look at the menu (which is conveniently placed on the back wall), then go up to the counter to place your order.

I was a bit late to the party when it came to the original Little Yellow Pig in Hoole, not visiting until 2018, four years after it opened. Since then I’ve been several times, most recently last summer, just before the second Little Yellow Pig opened in Nantwich, which is in East Cheshire, just to the west of Crewe.

It’s a part of the country that I either bypass by train (via Crewe or Shrewsbury) or road (M6 or A5/A483) on my way to/from my Dad’s. For a while it looked as if the second Little Yellow Pig would suffer the same fate as the first, but at the start of the month, driving back from my Dad’s to Guildford, prior to flying to America, I made a point of taking the A51, popping into Nantwich, and visiting Little Yellow Pig for breakfast.

Located on Pillory Street, on the southern side of the town centre, it’s just a few minutes’ walk from the train station (on the Crewe to Shrewsbury line), with several carparks nearby. Sandwiched between a cupcake shop and an Indian Restaurant, and sharing a door with the Chinese Medicine Centre which is upstairs, this is a much smaller space than the original in Hoole, although it’s more reminiscent of how Little Yellow Pig used to be before it extended into the adjacent space.

A long, old-fashioned multi-paned window runs across the front, with the door on the left. This leads into a small, square porch, where a door at the back gives access to the Chinese Medicine Centre, while the door to the right opens into Little Yellow Pig.

Occupying a cosy space with a low ceiling, Little Yellow Pig is roughly half as deep again as it is wide. The counter is on the left, just inside the door. A fairly small, busy affair, this has the till at the front and the La Marzocco Linea espresso machine on the right-hand side. An opening at the back leads to the enclosed kitchen which occupies the space behind it, leaving an L-shaped seating area along the front and down the right-hand side.

The seating starts with a four-person window-bar, which runs along the front, although since display space on the counter is at a premium, the cakes are displayed in the window (and removed if the window-bar seating is required). The remaining seating is on the right-hand side, where a padded bench runs along the wall, stopping just before the door to the toilet at the back. It’s lined with four two-person tables which can be pushed together to form groups of four. Opposite the last two tables, a pair of tall, two-person tables stand against the wall of the kitchen.

I’d come for breakfast, quickly settling on the veggie breakfast, along with a flat white, of course. Little Yellow Pig uses Hundred House’s seasonal Bon Bon espresso blend, which makes for a rich, smooth flat white, while the breakfast didn’t let me down. An overcrowded plate held a pair of fried eggs, avocado, spinach, mushrooms, tomatoes, halloumi and a pot of beans, along with a slice of toast, to which I added a second slice, both toasted to perfection. Each element was excellent, with the whole ensemble setting me up nicely for the long drive ahead.