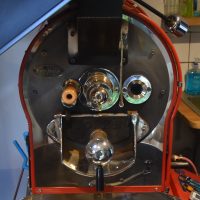 I first came across Surrey Hills Coffee in early 2016 at what was then Turn Fit Deli on Chapel Street in my hometown, Guildford. Although starting out as a deli, it quickly morphed into a coffee shop, supplied by Surrey Hills, which had started roasting in 2014, although Chris and Monika, the Swedish couple behind Surrey Hills, have a much longer involvement with coffee than that. In April 2016, Turn Fit decided to concentrate on its fitness business, and while Chris and Monika hadn’t planned on becoming coffee shop owners, they saw the opportunity and took over the lease to run the coffee shop themselves.

One thing led to another and by 2018, the original shop had moved to much bigger premises in Jeffries Passage. That same year, Surrey Hills opened its second coffee shop, The Pod at London Square, as well as growing a thriving, local wholesale business, supplying other cafes and retailers. Although the current COVID-19 pandemic has put the coffee shops on hold, this has, ironically, given Chris and Monika a chance to catch their breath and re-focus on the heart of their business, the roastery, which I learnt more about when we caught up last weekend.

Chris and Monika were already in the coffee business when they moved to London in 2010, with four shops in Sweden selling coffee equipment and white label coffee (coffee sold under their name, roasted by someone else). They sold home coffee equipment from a shop on the King’s Road, but discovered that far fewer Brits make coffee at home compared to the Swedes…

Looking for a new challenge, Chris and Monika decided to start roasting coffee, largely for their Swedish business. Living in London, they were regular visitors to the Surrey Hills, so it was an easy decision to relocate to the small village of Abinger Hammer in 2014, where they started roasting, initially on an electric 1 kg Toper (which Chris describes as “very basic”). However, that was soon replaced by the current gas-fired 10 kg Toper in a roastery in nearby Forest Green.

With the opening of the two coffee shops and a growing UK wholesale market, Chris and Monika sold their Swedish business to focus on the local market. Then, in 2019, they relocated the roastery. It’s common for roasters to relocate as business grows, usually because they’ve outgrown their original premises. In the case of Surrey Hills Coffee, it was the opposite. With the sale of the Swedish business, overall volumes decreased, so Chris looked for smaller accommodation and, through a chance conversation with his landlord (they rent a cottage, parts dating to the 15th century, from the National Trust), he hit upon the perfect solution: his garden.

The thing about Chris is that he likes a project. When the coffee shop moved to Jeffries Passage, Chris renovated the space himself, designing and building the new counter. So, when it came to housing a coffee roaster in the garden, he was in his element. While mere mortals might have bought a pre-fabricated shed or re-purposed an old shipping container, Chris just designed and hand-built what is now known affectionately as the Roasting Shack.

What’s more, he did it in a weekend, laying down the foundations in one day, then taking another day to build the shed using pre-cut timber he’d ordered from his own plans. He modestly told me that the most difficult part was moving the roaster (he had help for that). Two weeks after he started, on March 29th, 2019, the Roasting Shack had its first production roast and Surrey Hills Coffee hasn’t looked back.

With the roastery in the garden, Chris says that life’s less stressful. There’s no daily commute, for example. He gets up, turns the roaster on, then has breakfast. By the time he’s finished eating, the roaster’s up to temperature and he’s ready to go! And talk about having an amazing working environment: anytime Chris wants a break, he just steps into the garden.

Even after selling the Swedish business, running two coffee shops and a roastery has kept Chris and Monika busy. The COVID-19 pandemic has given them a chance to step back from day-to-day management and re-focus on the roastery. Fortunately, although wholesale sales to coffee shops have dropped, sales to consumers, either direct (via the Surrey Hills website or by text) or via local stockists, such as farm shops, have really picked up, with Chris and Monika out delivering locally every Tuesday and Friday.

Chris is also turning his focus towards single-origins and would like to roast more, to go with their popular blends (blends currently out-sell single-origins 10:1). There are two single-origins currently on sale, a Kenya Nyeri and a Rwanda Tumba Cocatu, but he’s just taken delivery of Surrey Hills’ first Ethiopian Yirgacheffe, so keep your eye on the website!

I’m currently enjoying an old favourite, Holmbury Hill (the house espresso blend), through my cafetiere every morning, while one of the single-origins, a washed coffee from the Tumba Cocatu cooperative in Northern Rwanda, is going down a treat through my V60 every afternoon. It tastes even better knowing that it’s been roasted in the Surrey Hills, just a few kilometres from my house!

August 2020: The shop on Jeffries Passage has reopened, but is now under the name Koja, run by Swedish friends of Chris and Monika. You can see what I made of it when I visited on just its second day!

December 2020: Surrey Hills Coffee was a runner-up for the 2020 Best Roaster/Retailer Award (and winner of the unofficial “Roaster with the Best View” Award).