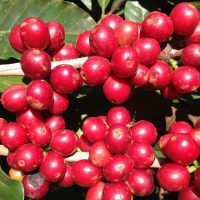 Welcome to another instalment of my Coffee at Home series. I began by focusing on brewing methods, with simple guides to the cafetiere, Clever Dripper and AeroPress. I’ve also written about equipment, such as grinders and scales. However, there’s something else I want to talk about. No matter how good your equipment is, how much you perfect your technique, there’s one thing it can’t fix, and that’s the quality of the coffee.

It’s easy to assume that everyone knows about coffee, but there was a point, before I started the Coffee Spot, when I knew very little. I clearly remember the sense of bewilderment when I first walked into a speciality coffee shop (Edinburgh’s Brew Lab), looked at the menu and realised that I had no idea what it was trying to tell me.

I’ll also say, from the outset, that if you are happy with the coffee you are currently buying/making, then that’s fine. Don’t let me, or anyone else, tell you otherwise. However, if you are dipping your toe into the world of speciality coffee for the first time and are wondering what tasting notes, varietals and processing are all about, then this is the post for you.

You can find out more after the (very small) gallery.

Coffee, by the way, is far too big a concept to be covered in a single post, so I’m going to start with where coffee comes from and take it from there over a series of posts.

Until I started the Coffee Spot, I’d given very little thought to where coffee came from. Back then, I got my coffee from Coffee Charisma, at the time a fixture of Guildford’s North Street market. I knew what I liked (Guatemalan Elephant was my favourite) and I knew what I disliked (I always struggled with Kenyan Peaberry), but beyond that, I didn’t really give it any thought.

I didn’t even know that there were different coffee roasters. I was vaguely aware of names such as Taylors of Harrogate (who I discovered over 30 years ago when I was a student at York) and, when I moved to the southeast, Monmouth. However, it was only when I started the Coffee Spot that I quickly realised just how many roasters there are: Square Mile in London and Staffordshire’s Has Bean were just two of the names I quickly became familiar with.

It wasn’t long before I started to disappear down the speciality coffee rabbit hole, as I learnt more about roasters and, through them, about coffee. They introduced new (to me) concepts such as direct trade and specific origins, although I wouldn’t want to give you the impression that these are exclusively the realm of the small, speciality roasters. For example, Taylors has been practising many of the cornerstones of the speciality industry, such as working directly with farmers, for many years. This includes establishing long term contracts, fair pricing and investing in sustainability initiatives.

Direct trade is, for me, all about these things, buying, as close as possible, from a specific coffee farmer, which means that it goes hand-in-hand with origin. I say as close as possible, because this very much depends on where you are in the world. In much of Central and South America, for example, a coffee importer (and, increasingly, individual roasters) can buy directly from a specific farm. In other parts of the world (Africa, for example), smallholder farmers sell their beans to a washing station, which the importer deals with.

The bulk of coffee traded today is through commodity markets, where the price bears little relation to the quality of the product. The aim of direct trade is to link the price more directly to the quality, so if a farmer produces a higher quality product, the price is correspondingly higher, often far higher than the commodity price. This in turn gives the farmer an incentive to produce better quality coffee and the money to invest in the necessary techniques and equipment.

Throughout this, traceability is a key concept, which is where the term “single-origin” comes in. You’ll see this used frequently throughout the industry (myself included) and generally it means that a coffee comes from a single source, be it a farm or a washing station. This is very different from saying that the coffee is from a country, by the way.

To give just one example, I started a new coffee today, a single-origin Colombian. You’ll see plenty of people selling Colombian coffee, but this just means that the coffee came from Colombia (and is probably from a range of producers). In contrast, my single-origin Colombian, which is roasted by Curve Coffee Roasters, has a name, “San Lorenzo”, the packet telling me that it is “produced by small growers of the San Lorenzo producer group in Caldas, Colombia”.

The name, in this example, is therefore the name of a producer group, rather than a specific farmer, and I know that they are from Caldas, a department in the Paisa Region of Colombia between Bogota and Medellin. Going to Curve’s website, I can find out more details, including the importer, Falcon Speciality (one of several UK speciality coffee importers). Going to Falcon’s website gives me information about the producers, including that each farmer has approximately half a hectare of land, typically growing 2,500 coffee trees (click on the “Lot Details” tab on the Falcon website if you want to read more).

Another coffee that I’m drinking at the moment is a Nicaraguan single-origin roasted by Hundred House Coffee, which is from the San Maria Estate in the Jinotega region. Hundred House’s website tells me that it’s one of seven estates owned by Victor Robelo. In both examples, the coffee is traceable to a specific producer, who directly benefits from the higher prices being paid.

Direct trade and single-origins are, in themselves, subjects that you could write whole books about, so a single post is not really going to do them justice, but I wanted to give you an idea about one of the driving forces behind speciality coffee.

That’s it for now. In future posts, I’ll talk more about origins and what else goes into influencing the flavour of coffee.

7 thoughts on “Coffee, Part I: Origins”