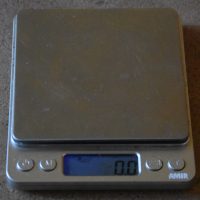 Welcome to another instalment of my Coffee at Home series which has, to date, focused mostly on brewing methods, with simples guides to the cafetiere, Clever Dripper and AeroPress. However, I’ve also written about grinding coffee at home, while today I want to turn my attention to another important piece of equipment: scales.

Let’s start by answering a simple question: do you need scales in order to make good coffee? Emphatically, no, you don’t. As I’ve shown in my first three guides, you can make good coffee without scales. However, that doesn’t mean that scales should be overlooked, particularly as you get drawn further into the world of speciality coffee (warning: in case you haven’t guessed, that’s what this series is all about, drawing you slowly down the rabbit hole of speciality coffee, one article at a time, until it’s too late and you can’t back out).

Back to scales. Scales can be very useful: for example, I use them whenever I make coffee. In particular, as you approach the more specialised end of coffee making, such as pour-over and espresso, I’d argue that scales start to become essential. So, with that in mind, what should you be looking for?

Let’s start with the obvious: I’m talking about digital scales. Although I love my old-fashioned balance scales, and use them all the time when I’m baking, they don’t have the precision I need for working with coffee. As a minimum, you’ll want something that reads to an accuracy of one gram, which is pretty much any basic kitchen scale. If you don’t have a set, you can pick these up on-line for as cheap as £10 (typically £10-£20), while they’re also common in supermarkets and hardware stores.

However, if you don’t have any, I’d urge you to get a more precise set of scales instead. For a similar price, you can get a set of scales which will read to an accuracy of 0.1g and take a maximum weight of typically 2 or 3 kg. Personally, I’d avoid those with a capacity of 500g, since they will limit what you can do with them, particularly when it comes to pour-over. These scales also tend to be smaller than standard kitchen scales, which is useful if you want to include them in your travelling coffee kit.

Finally, if you really want to splash out, several coffee equipment specialists make scales. These have the same basic capabilities as the cheaper sets, but also include features such as built-in timers and waterproofing. Typically, these are in the £50 price bracket, but you can push the boat out if you really want to and spend between £100 to £200 on the higher end models, which are the sort you’ll find in coffee shops. These include features such as Bluetooth connectivity and dedicated brewing apps on your smartphone.

I actually own three sets of scales, two of the cheaper variety, and one set of Bonavita scales (a gift from Bonavita). These live at home with me, while one of the cheaper sets is at my Dad’s, with the other forming an integral part of my travelling coffee kit. I’ve never owned any of the really high-end scales, so I can’t comment on whether the extra features are worth the money.

Personally, I’m very happy with my Bonavita scales, mainly using the in-built timer, which means there’s one less bit of kit I have to worry about. My scales do have several automated modes, which (in theory) will start the timer when, for example, you start pouring, but I never got on with them and always use mine in manual mode (I press a button, the timer starts…).

So that’s the scales themselves. Next, I want to talk about why you would want to use them, which you can find out about after the gallery.

The first thing I use my scales for is weighing my coffee beans. You’ll see that my recipes in the various guides I’ve written typically call for 15g or 18g of beans. If you’re using scales with an accuracy of +/- 1 gram, that’s quite a variation. Weighing to an accuracy of +/- 0.1 gram effectively means you’re down to the level of weighing to a single bean (which, if I’m honest, is probably more accuracy than you need!).

However, by being accurate, you’re reducing variation between your brews and that can be important if things start to go wrong. Consistency is at the heart of good coffee brewing: doing the same thing, with the same quantities each time. While I know some amazing baristas who can do everything by eye, let’s be honest here: most of us aren’t amazing baristas. I’m certainly not, and when I started regularly weighing everything, I noticed that the consistency of my coffee brewing definitely improved.

The second thing to weigh is your water. 300ml of water is 300g of water so you don’t have to do any conversion. Again, by improving your accuracy, you’ll improve your consistency. This is particularly true when it comes to more advanced methods such as pour-over and espresso. Weighing my pour-overs, particularly weighing the coffee as it came out, helped me no end, while weighing my shots really made a huge difference in my ability to make good espresso.

So, to come back to where we started: no, you don’t need a set of scales, but as you progress in your coffee making, I think you’ll find that they become increasingly helpful. And that’s where we’ll be going over the next few weeks with the Making Coffee at Home series as we progress to pour-over and espresso.