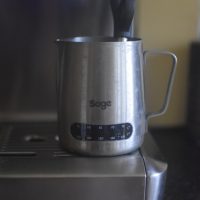 Some of my coffee-making equipment, such as the subject of last weekend’s Saturday Supplement, the Sage Barista Express espresso machine, are quite valuable pieces of kit. Some, on the other hand, are fairly cheap, and yet have had a huge impact on my coffee-making. The humble digit scale is a good example: costing as little as £10, scales really helped improve my coffee brewing. Today’s Saturday Supplement is all about a similarly inexpensive piece of kit which has helped my milk steaming (although, alas, not my latte art): the Sage Temp Control, a temperature-sensitive milk steaming jug.

Getting the temperature of the milk just right is really important when it comes to coffee. No-one wants a lukewarm flat white, but neither should it be too hot. If the milk gets above around 65°C, it undergoes a series of irreversible chemical reactions which significantly change the way it tastes. I know that skilled baristas can judge the perfect temperature just by touch, but mere mortals such as myself, who make a once-a-week milky espresso drink (I hesitate to call what I make a flat white) need a little help, which is where the temperature-sensitive milk steaming jug comes in.

Now, I’m the first to admit that “temperature-sensitive milk steaming jug” is a bit of mouthful, but I’m not sure what else to call it. The particularly one I have was actually a gift from Sage and goes by the catchy name of The Temp Control. Similar items are available from other retailers for under £20. They all work in the same way, combining a standard stainless steel milk jug with a heat-sensitive strip on the side. In fact, if you already have a jug that you like, for around £10, you can buy the strip by itself and stick it to the side of the jug.

The strips contain a series of liquid crystal indicators which change colour at different temperatures. My jug has five of these in 5°C steps, going from 55°C to 75°C. They turn green when they reach the specified temperature, after which the indicator turns blue if the temperature is exceeded by a few degrees.

I’m aware that you can also get milk thermometers which go directly into the milk, but, for home use, the temperature-sensitive strip seems a much better solution. To start with, since it’s on the side of the jug, it’s quite hard to lose, plus it’s one less thing to wash up afterwards!

Before I got my jug, I was pretty bad at steaming milk. The technique I was taught is to hold the palm of your hand against the outside of the jug and, when it’s too hot to keep it there, the milk is at the correct temperature. However, I proved to be a poor judge of temperature and, I suspect, I was afraid of over-heating the milk, so I always used to turn the steam wand off too soon, resulting in a series of lukewarm drinks. Plus, because I was focusing on the temperature, my texturing was terrible too.

Now, with the jug telling me when the milk’s reached the correct temperature, I can focus on texturing, confident that I’m going to get the perfect temperature each time. One note of caution though: don’t get complacent. Even with my Sage Barista Express, which has a fairly low-powered steam wand (which means that it takes a long time for the milk to heat up initially), the transition from 55°C to 65°C and beyond happens pretty quickly! From the first indicator starting to turn blue to the middle one (65°C) showing a solid green (which is when I stop steaming) is typically under 20 seconds. 10 seconds after that, the 70°C indicator is solid green and, as far as I’m concerned, I’ve overheated the milk!

So, there you have it. A simple, cheap piece of kit which has really made a difference to my milk-steaming. Now all I need to do is master latte art!