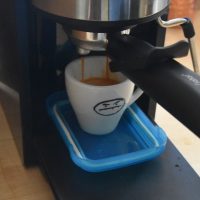 Last month I wrote about Amanda’s new Coffee Gator espresso machine, which she’d bought for under $150. Although it far exceeded my expectations and consistently makes good espresso, I found almost everything else about the Coffee Gator to be intensely annoying, particularly after spending the last five years using my Sage Barista Express. As a result, as soon as I began using the Coffee Gator, I started to think of ways that I could improve the experience, which in turn has led to this series of posts.

In Part I, I wrote about a couple of cheap accessories (a dosing funnel and a proper tamper), which improve the workflow during preparation. Today’s post is focussed on improving the experience of pulling shots and is all about how you can weigh shots with the Coffee Gator. Depending on what equipment you already have, this can be a no-cost option. That said, even if you don’t have any scales, these days, high-quality coffee scales are easily affordable, and I strongly recommend that you get some.

The third and final post in the series will look at the pros and cons of upgrading the Coffee Gator’s pressurised basket, which you might want to consider.

You can read about weighing shots with the Coffee Gator after the gallery.

Unfortunately, Amanda’s scales are (far) too big to fit under the portafilter, so instead I took to stopping the extraction by eye, using a combination of how full the cup is and how the stream of coffee from the portafilter changes colour. Then, once the shot was over, I’d weigh the shot (having previously zeroed the scales with an empty cup) to check how well I was doing.

With this method, I found that I was running my shots a little long, tending to pull 40-gram extractions in 25 to 30 seconds. I also found it frustrating, having to remember to zero the scales beforehand and have my phone to hand, unlocked and ready to start the stopwatch. On top of all my other frustrations with the Coffee Gator, I decided enough was enough and I was going to have to find a way to weigh my shots.

As luck would have it, it was Amanda’s birthday and I’d already decided to buy her a set of scales, opting for the Hario V60 Drip Scale, which is widely available. This has a built-in timer, is water resistant and, crucially compared to Amanda’s existing scales, which we were using for pour-over, doesn’t randomly timeout in the middle of a brew (cue even more frustrations on my part). Perfect, I thought. I’ll just use those to weigh my shots.

Except, of course, the Hario V60 Drip Scales (which, despite the name, are perfect for espresso) are fairly large and, crucially, at 12 cm wide, just too wide to fit on top of the Coffee Gator’s unreasonably small drip tray. Cue even more frustration on my part, until I remembered that I had my travel scales with me. This is a small set of coffee scales which weigh to an accuracy of 0.1 grams, have a response time quick enough to make weighing espresso feasible and, crucially, is only 10 cm wide, which is just narrow enough to fit onto the drip tray.

Even better, at 12.5 cm deep (compared to the Hario’s 19 cm), my travel scales didn’t overhang the front of the drip tray by too much. Suddenly, I could weigh my shots, which quickly led to my cutting the extraction time to between 20 – 25 seconds, thus achieving my desired 32 grams out (for 16 grams in).

Success! Until my frustration got the better of me again, which you can read about after the gallery.

Although I was successfully weighing my shots, the problem was that I still had to separately time them using my phone, although the use of the phrase “had to” is debatable. Let’s just say I wanted to time my shots and found using my phone to be an added frustration when I had a perfectly good set of scales which had a timer built in.

There we other frustrations too. As I’ve already mentioned in my original write up, the Coffee Gator’s pressurised basket, along with the bizarre design of the portafilter, results in a lot of liquid being retained after you’ve stopped the shot. This dribbles out a few seconds later, so you have quickly remove the cup to stop this ending up in your carefully weighed espresso shot. If you’re not weighing your shots, this isn’t an issue since it ended up in the drip tray (which, after all, is what it’s designed for.

However, when you are weighing your shot, it ends up on your scales and, as I’ve discovered to my cost, this is not a good idea, having already written off one set of my cheap travel scales with a pour-over accident. Of course, you can avoid this by removing both scales and cup (more faff) or using the lid of the scales as a second drip tray (put the lid upside down on the top of the scales, then put the cup on top of the lid). Neither of these is ideal though, particularly not when you have a set of water-resistant scales with a built-in timer to hand…

I put the back of the scales under the group head, rested the front on the now detached drip tray and I had a stable platform for my scales, allowing me to weigh and time my shots. I had one other modification for pulling espresso. I found that a typical espresso cup (either Amanda’s Café Grumpy cup or her Tazza D’Oro cup) wasn’t quite wide enough so with the scales only half under the group head, there was a real danger of the espresso ending up running down the outside of the back of the cup.

The solution was again quite simple. I just needed something that I could rest the cup on and overhang the back of the scales by a small amount. In the end, one of Amanda’s Tupperware lids provided the perfect solution and I was up and running!

In conclusion, you can, despite the Coffee Gator’s limitations, weigh and time your shots, even if it does require a little bit of ingenuity. If you already have a set of scales, then this is a no-brainer, while if you don’t, I really do recommend you get some for your coffee brewing. If you don’t care about having a built-in timer, then a cheap set of travel scales like mine will set you back £10/$15 and for a little bit more, you can find scales with a built-in timer too.

In closing, I will say that I know that everyone isn’t going to be as obsessive about weighing their shots as me. Amanda, for example, thinks my method of pulling the drip tray out is far too complicated and is happy eye-balling her shots, which is what she’s been doing from the start. I even offered to swap my travel scales for her Hario scales, but for some reason she declined my kind offer…