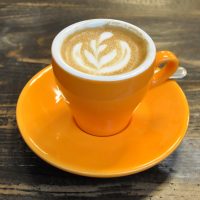 Regular readers will know that I have a soft-spot for Brooklyn-based, Aussie-influenced roaster/coffee-shop chain, Café Grumpy. I first came across its Chelsea branch in 2015, before discovering that its Lower East Side branch is just around the corner from my hotel on my return in 2016. On that trip, I also discovered one of Café Grumpy’s more recent branches, right in the heart of New York City in the Fashion District.

This has all the hallmarks of Café Grumpy, including its trademark no laptop policy. While you can argue with the merits or otherwise of this, Café Grumpy’s very upfront about this. The coffee offering’s the same across all branches: house-blend, single-origin and decaf on espresso, five single-origins (including a decaf) on pour-over and two more on bulk-brew. It’s also worth remembering that while now it seems that everyone on the East Coast’s offering pour-over, Café Grumpy was doing it long before it was trendy.

In terms of layout, the Fashion District branch takes the no laptop philosophy to its logical conclusion. The seating consists of two large, communal tables, plus a bench at the back. While you can sit quietly by yourself, it really is designed to promote communication!

I think Café Grumpy’s stalking me. Its Lower East Side branch is around the corner from my usual hotel and now I’ve discovered the Fashion District branch, which, on the corner of W 39th Street and 7th Avenue, is two blocks from the Port Authority bus station, my de facto entry point into New York when I’m staying with my friends in New Jersey. It’s also six blocks from Penn Station, another of my popular entry points. Fate, it seems, has determined that I start my days in New York with a visit to Café Grumpy.

One of the things that impressed me about Café Grumpy is that it sticks to its ethos no matter how big or small the branch is, or how busy they are. Even when the baristas are run off their feet, they’re still making pour-overs, a time-consuming business at the best of times. The coffee-offering is also the same across all the Café Grumpys, from the shoe-box sized Lower East Side branch to the larger branches such as this one.

However, each Café Grumpy has its own look and feel. In comparison to the Chelsea branch, which is long and thin, consisting of multiple spaces in an old building full of character, the Fashion District is a plain, rectangular block, with a simple layout. Despite this, Café Grumpy manages to inject plenty of character of its own into the place.

About twice as deep as it is wide, the front is wall-to-wall, floor-to-ceiling glass, with the door on the right-hand side. The counter dominates the right-hand side of the store, an enclosed kitchen behind it at the back. The bright-orange Synesso espresso machine is front and centre, greeting you as you enter, which is also where you collect your coffee. To your left, a wooden bench runs the width of the window, with a large, ten-person communal table in front of it.

The rest of the counter runs towards the back of the store, opposite another communal table, this one seating 12. Finally, right at the back, opposite the kitchen area and past the retail shelf on the left-hand wall, you’ll find a long bench which mostly seems to be used as an overflow area for people to sit when the queue gets too long (which happened a couple of times during my visit).

You order at the end of the counter, where you’ll find the cake and the till. The menu is also helpfully chalked on the wall of the kitchen to your left. You then file down past the flasks of bulk-brew and the filter-station to the front to collect your coffee. Fortunately there’s plenty of space where you can wait without getting in anyone’s way.

As this was my first coffee of the day, I went for a flat white (Café Grumpy being one of the few NYC places with a proper-sized flat white). The barista recommended the Heartbreaker blend over the single-origin which he said would be more acidic (he was right: I tried it at the Lower East Side branch). My flat white was very good, sweet and well-balanced, served in a six-ounce tulip cup, with well-steamed milk.

Sadly I didn’t have time for a pour-over, but I was impressed by the single-origins on offer, which change every week or two. I also met one of the owners, an American, whose business partner is an Australian, which explains the flat whites (and Lamingtons in the cake selection). Café Grumpy is now over 10 years old and growing organically, adding two more stores (for a total of eight) since my visit!

You can also see what I made of Café Grumpy’s Chelsea, Lower East Side and Nolita branches.