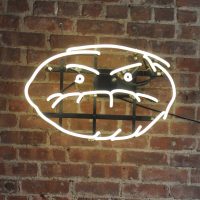 Café Grumpy, a small, local coffee shop chain, roasts all its own beans in Brooklyn. With its no compromise attitude, it’s fast becoming one of my NYC favourites. The Lower East Side branch, on Essex Street, is the smallest and is perhaps my favourite (of those I’ve visited so far).

My go-to place for morning coffee used to be the original Pushcart Coffee on East Broadway. Just a few blocks east of my usual hotel in Chinatown, it was perfect. Then it closed and, for the last two years, I’ve been coffee-less first thing in the morning: not the ideal situation!

Embarrassingly, I only discovered Café Grumpy on my most recent trip, not realising that the Lower East Side branch had been open since 2012, some while before Pushcart closed. Just around the corner from my hotel, it’s every bit as convenient as Pushcart, so I needn’t have gone coffee-less all those mornings. What an oversight!

The Lower East Side Café Grumpy is, as I’ve said, the smallest yet, just a simple rectangle, counter at the back, with a broad, marble window-sill at the front which you can sit on. Two stools sit at the right-hand end of the counter by the Synesso espresso machine where you can perch and chat with the barista. There’s more seating outside, a two-person garden bench, its back to the window, with its twin facing it from the opposite side of the sidewalk.

Café Grumpy doesn’t exactly jump out at you, although once you know it’s there, it’s easy enough to find. However, I walked past, only spotting it when I saw some coffee-drinkers on the benches outside. It’s even worse when closed: I’d utterly failed to find it the night before, having specifically gone to check out the location. With the shutters down, there’s nothing to indicate that it’s a coffee shop, let alone a Café Grumpy.

Something that’s always impressed me about Café Grumpy is the range of coffee on offer. As well the obligatory bulk-brew (drip), Café Grumpy championed pour-over long before it became fashionable. It typically offers five single-origins on pour-over, one of which is a decaf, while on espresso there’s the seasonal house-blend (Heartbreaker), another single-origin and decaf.

You’d think that somewhere as small as the Lower East Side branch might be tempted to cut back on its offering, but not Café Grumpy: the full range, including pour-over (through the Chemex), is available. During my visit, a single-origin from Honduras was on bulk-brew (the selection changes daily, chosen from the available beans) while the guest espresso (which changes every six weeks or so) was a Gatuyaini Kenyan Peaberry.

I started my day with a flat white, a well-made, well-rounded coffee, very typical of the ones I’ve had before at Café Grumpy, one of the few places in New York with a proper-sized flat white. The barista also tempted to me try the guest espresso. Normally I’m wary of Kenyan espressos and this one such occasion where my caution was justified. It was a well-pulled shot, but the Kenyan’s natural fruitiness was a bit too much for my poor palate, particularly first thing in the morning, when it hadn’t really woken up.

The Lower East Side branch is quite wonderful, a real neighbourhood gem. Most customers came for takeaway and were on first-name terms with the sole barista. However, a few stayed to drink their coffee, including the manager, who’d come in on her day off! Usual Café Grumpy rules apply by the way: no Wifi, no laptops, although where I’d have put the laptop if I had tried to use it, I have no idea!

December 2016: Café Grumpy, Lower East Side was a runner-up for the 2016 Smallest Coffee Spot Award.

You can also see what I made of Café Grumpy’s Chelsea, Nolita and Fashion District branches.