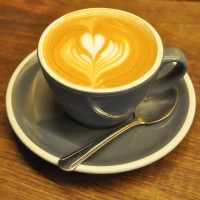 Since my last visit to America, I’ve been spending a lot of time at Beany Green in Paddington, where many flat whites have been consumed. So, after a week in America without a decent flat white (and, in general, without even a sniff of one), I finally had to admit defeat. So, one snowy Saturday morning, I headed downtown to very nearly the tip of Manhattan, to seek out Bluestone Lane, a self-professed Aussie coffee shop.

The first task was to find Bluestone Lane, since while the address is 30 Broad Street, the actual entrance is on New Street, a narrow lane south of Wall Street, squeezed between Broad Street and the even broader Broadway. However, once you’ve found it and gone through the correct set of (three) doors, you find yourself in a little slice (with the emphasis on little) of Australian coffee heaven.

There are flat whites and long blacks on the menu (plus bulk-brew for American sensibilities), with the likes of avocado on toast, banana bread and toast with vegemite, plus Lamingtons in the cake selection. The coffee’s all the way from San Francisco’s Sightglass, which I guess is at least on the way to Australia!

April 2018: Bluestone Lane has now spread across America, with a series of coffee shops and brunch-style cafes, as well as roasting its own coffee. See what I made of the Rittenhouse Square cafe in Philadelphia when I visited last month.

The Manhattan branch of Bluestone Lane, which has been around since the end of 2013, is the second of five (so far), although the fifth is not accessible by the general public. The layout’s a slightly confusing: the address is Broad Street, while the entrance is on New Street, for example. Don’t, by the way, try to get in from Broad Street: Bluestone Lane is part of an office building at 30 Broad Street and, while you can get to Bluestone Lane from the offices, the public can’t get into the offices in the first place.

So, back on New Street, what looks like the entrance to Bluestone Lane is, in fact, an external seating area, which, in the summer, is open to the elements. This, however, being a New York winter, calls for a little more protection, so the two exposed sides are covered with permanent-looking blue (I think canvas) walls, complete with windows and a door on the left-hand side.

Stepping inside, you enter a large, bright space, with a stone-flagged floor and a table with three chairs on the right-hand side. Ahead of you is the entrance-proper, a door on the left-hand side, which leads to a short corridor, with, airlock fashion, a second door at the end. Head through this door, and, finally, you’re into Bluestone Lane. And, trust me, it’s well worth the effort.

It’s a small place, with the counter at the far end, taking up around a third of the available space. Rather disconcertingly, there’s a corridor running along the right-hand side; this provides access from the office building on 30 Broad Street (and runs all the way to New Street, you just can’t get in that way). Office workers can come down to order from Bluestone Lane, which is rather cool, having your own speciality coffee shop on the ground floor. Technically you can’t get into Bluestone Lane this way, so it’s strictly takeaway only for the office workers, but I’ve been told that they do hop over the dividing wall between corridor and coffee shop.

The seating is in the form of a bar running along the corridor and then around into a U-shape in a little niche to the right of the entrance corridor. In all you can squeeze eight in.

The owners hail from Melbourne, and the Australian influence runs through the Bluestone Lane. Not only does it do a real flat white, but the menu is very Australian too, with the likes of Avo Smash (avocado on toast). Having spent a lot of time in Aussie-inspired coffee shops in London, it was strangely refreshing.

I was well looked after by my two baristas, Angela, an Aussie from Perth, and Sophia, an American. My flat white was good, but I wasn’t convinced that the coffee (for my palette at least) went too well with the milk. There was a slightly discordant note, although the balance improved as the coffee cooled. The milk, by the way, was superbly steamed, the pattern holding all the way to the bottom of the cup. Having never knowingly had Sightglass before, I also tried it as a straight espresso, which I much preferred. It was a quite a fruity shot, which I suspect was the discordant note I could taste in the flat white.