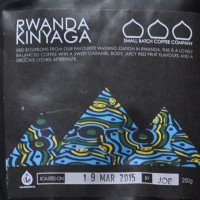 On Thursday last week, I was fortunate enough to be invited to a cupping being held by Brighton roaster, Small Batch, although rather than having to go all the way down to the south coast, I just had to pop along to Seven Dials and surf shop, Finisterre. While this may seem a strange location for a coffee cupping, it makes more sense than you think, since Finisterre, as well as being a surf shop, also has a lovely little coffee shop, serving Small Batch (although you’d probably already guessed that at this point).

The guys from Small Batch (head-roaster, Al; barista trainer, Laura; and Dan) were joined by Cory from green-bean importers, Falcon. Cory was there due to his experience in Africa, where he’s been working on building links with local farmers, helping them grow sustainable coffee businesses. Cory’s presence was important because this was no ordinary cupping. Instead, Small Batch was showing-casing its range of coffee from Rwanda, with six coffees in all, each from a different washing station (all the coffees are named after the washing station which processed them). There was also a seventh coffee, a Shembati Buziraguindwa from neighbouring Burundi, to provide some contrast.

As well as the guys from Small Batch and Cory from Falcon, I also ran into fellow coffee writer, Alison, of Black Coffee and Other Stories fame, who is in the process of opening her own coffee shop, BLK Coffee, in Heaton, up in Newcastle (you can see what Alison made of the evening over on Black Coffee and Other Stories). Before we started the actual cupping, Al gave a short talk about Small Batch and its philosophy of ethical sourcing and the importance of tracing beans back to source, which neatly led into Cory, who talked about how Falcon supports local coffee growers around the world.

This went to the heart of why much of the speciality coffee industry is so focused on sourcing. As Cory put it, it’s the ability to have a direct, beneficial impact on people’s lives in some of the poorest parts of the world. Coffee is a commodity business, where small farmers are at the mercy of a (rapidly fluctuating) world market. Growing coffee is a long-term business, with trees frequently taking years to reach maturity. By working directly with farmers, and by paying a consistent (and well-above commodity) price, it gives them stability, plus the ability and incentive to invest in their farms (for more on this try Alison’s piece on traceability and transparency).

While they were talking, the cupping got underway. If you’ve not been to a coffee cupping before, they’re drawn out affairs, following a standard procedure to ensure as much uniformity as possible. As I well know, even with my limited palette, the preparation method can make a huge difference to how coffee tastes; hence when cupping, you want to eliminate as much of this variation as possible.

First the coffee is ground and put into little bowls, then hot water is poured over the (rather coarse) grounds. These steep for five minutes, then the crust is broken with the back of a spoon. At this point, stick your nose into the bowl (but not the coffee!) and have a good sniff, taking in the coffee’s aroma.

Next, any surface grounds are removed and we’re ready to taste. Technique is all-important and mine needs a lot of work! Taking a small amount of coffee in a spoon, the aim is to slurp it with a sharp intake of breath, the air mixing with the liquid, dispersing it more evenly around your mouth. You should be looking to taste the coffee at various temperatures since a coffee will often evolve in taste as it cools. Finally, if you don’t want to get over-caffeinated, don’t forget to spit the coffee out at the end rather than swallow it.

For more on cupping try this article and video from Has Bean. The video is particularly good if you want to hear what a good slurp sounds like!

The Rwandan coffees were, unsurprisingly, rather similar, since they’re all the same varietal, processed by the same method (washed) and grown at similar altitudes. Despite this, there were noticeable differences between them, while the Burundian coffee really stood out as much brighter and fruity. Definitely not for me!

Of the Rwandans, the Shyara Mountain was the only one from this year’s crop, having just arrived at Small Batch. As a result, it was rather raw and a bit much for me. In trying to pick my favourite, I was also able to quickly rule out the Karengera (too tea-like), but the other four were all lovely. Eventually I went for the Musasa Ruli Kare, but don’t ask me why!

All-in-all, a thoroughly entertaining and informative evening. And I didn’t even get a caffeine hangover!