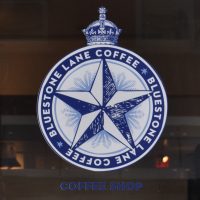 Located just east of Rittenhouse Square, Bluestone Lane is off the lobby of the Warwick Hotel, which occupies a large plot on the corner of Locust and S 17th Streets, with its entrance on S 17th Street. While Bluestone Lane is set up to handle customers entering from the lobby, there are also two direct doors to the street, which most people seem to use. These are in opposite corners, one on Locust Street, the other on S 17th, which explains the café’s Locust Street address.

The layout’s rectangular, short side facing Locust, long side running down S 17th. Although this gives Bluestone Lane windows on two sides, they are all fairly small, with just two windows on Locust St and three on 17th. Fortunately, there are plenty of spot lights to supplement the natural light.

I’m going to call the short side on Locust Street the front of Bluestone Land, with the right-hand side along 17th St, while the entrance from the hotel lobby is half-way down on the left. The space is dominated by an island counter, with coffee on left, kitchen on the right. If you’re taking out, the till is at the top (front) end of the left-hand side of the counter, but if you’re staying in, there’s table service, so grab a seat.

There’s plenty to choose from. A series of window-bars run along the Locust & 17th St sides, while there’s also seating at the counter along the (right-hand) kitchen side, and all along the back. However, the bulk of the seating is in a generous space between the counter and the back wall. The centrepiece is an 8-person communal table, a pair of two-person tables against the back wall itself. The right-hand wall holds the final part of the window-bar (six stools) while on the left-hand side there’s a pair of armchairs, a four-person table and then a wooden bench that runs to the back wall with four two-person tables.

The décor is, as my friend Greg put it, very blonde, with off-white painted walls/ceiling and light wooden furniture, which matches the counter. Ironically, given its unashamedly Aussie roots, the Rittenhouse Bluestone Lane is the one place, in all my recent American travels, that most made me feel like I was back in London, which says a lot about the Aussie influence on the UK coffee and brunch scene.

I first called into Rittenhouse Square in 2016, not long after Bluestone Lane had opened, when the coffee was being roasted by Nicolette, with the single-origin coming from Sightglass. Back then I tried a split shot of the house blend, finding the espresso to be quite dark, but excelling in milk, where the sweetness milk took the edge off the coffee. On my return, I went for a flat white, made with the Maverick blend, a smoother, mellower coffee, which was the perfect start to my day.

However, Bluestone Lane is as much about brunch as it is about coffee. In 2016, I had the Aussie baked beans with eggs: a skillet of beans, topped with two poached eggs and a tiny bit of toast. When I returned this year, it had been replaced on the menu with Green Baked Eggs and Red Baked Eggs. I had the green, which were excellent, while the accompanying toast was of more generous proportions, although I’d learnt my lesson from the previous visit and also ordered an extra slice.

I finished with a large double-shot of the single-origin espresso, a Colombian Hulia. This was quite a light roast, with a pleasant acidity, nicely rounding off the meal.