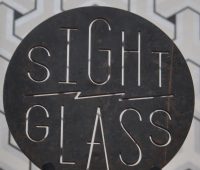 The first thing to say about Sightglass (which practically everyone recommended that I visit when I went to San Francisco) is that it’s huge! It might not be as big as say, Caravan, King’s Cross, but it’s getting there. This is Sightglass HQ, which is where it all started back in 2009. It houses the roastery, coffee bar and the company’s training room and offices. What’s amazing, from a UK perspective, is that other than the roastery and offices, which occupy less than half the space, all Sightglass does is serve coffee, backed up with a few pastries. There’s no food service here, something which I’d find unimaginable in a similar-sized (or indeed much smaller) operation in the UK.

This does mean that the focus is firmly on the coffee, however, which is all roasted on-site. There are two counters: the main one, downstairs, serves the Owl’s Howl espresso blend, with three single-origin filters, one on batch-brew and two on pour-over through the V60, all three changing daily. The smaller counter, which is upstairs at the back of the mezzanine, opens at 11 o’clock and serves two single-origin espressos, plus the Blueboon filter blend on V60. The two single-origins, a Kenyan & a Honduran, change on a seasonal basis.

The Sightglass Coffee Bar & Roastery is housed in an old warehouse on 7th Street in the SOMA (South Of MArket) district of San Francisco. Dating from 1914, the building is huge, open from the floor all the way to the rafters (I estimate it’s maybe 15m from the floor to the tip of the roof which is ridged, running front to back). It’s an incredibly bright space, with the front being almost entirely glass, while the roof is punctured by multiple skylights. All of this gives it an immense sense of space.

You enter at the left, a long, wide corridor leading from the street to the door. The left-hand wall is given over to secure cycle storage while to the right there’s a bench for some sheltered outdoor seating. This right-hand side is also a window, so you can look right into Sightglass.

The roastery area is on the right, occupying much of the front of the store, pride of place going to the vintage (1961) Probat roaster which vents through a very shiny, modern chimney going straight up through the roof. Surrounded by sacks of green beans, there’s a curved counter with about 10 seats running around it, so you can sit and watch the roaster at work. There’s also a window-bar in the front window if you like people-watching.

The back part of downstairs is occupied by the counter, a horseshoe-shaped affair which points directly towards the door. The curved end houses the cake , plus two tills, which greet you as you enter. From there you flow to either side to collect your coffee: there is a two-group La Marzocco Strada on either side, while the pour-over station is on the left.

For more seating (and amazing views) head up to the mezzanine level at the back via the flight of stairs in the back left-hand corner. There are two large, twelve-person communal tables up here right at the back, while down the left-hand side there are four four-person tables. Best of all is a ten-person bar at the front of the mezzanine section which overlooks the counter and roastery. I’ll let you guess where I sat.

The second counter is up here in the back right-hand corner. It starts serving at 11 o’clock and offers two single-origin espressos in contrast to the blend downstairs (both counters also serve an Ethiopian Yetatebe single-origin decaf). Sightglass’ training area/cupping room is on the right-hand side, but sadly it’s not routinely open to the public. Finally, the mezzanine at the front of the building is given over to offices.

I started with a cappuccino, made with the Owl’s Howl blend. It’s quite a dark, old school roast, the coffee cutting strongly through the milk, in many ways the perfect first coffee of the day for me. I followed that up with a V60 of a Rwandan single-origin, made using a series of short, distinct pours and served in a mug. This was a fairly mellow coffee in contrast to the cappuccino, but it evolved and improved as it cooled. Finally, I went upstairs for a shot of the Kenyan single-origin espresso. This was served with glass of sparkling water and was a bright and acidic. It wasn’t quite a full punch-in-the-mouth experience, more a gentle slap on the cheek.

July 2022: you can see what I made of Sightglass on Divisadero, which opened not long after my visit to the Coffee Bar & Roastery in 2017.

For those of you how are interested, I popped back to Sightglass and confirmed that the Probat does indeed date back to 1961. A mere 56 years young :-). The weird gears on the side are an original feature, with the top gears/chain running the extractor fan, while the bottom gears/chain runs the cooling pan, all from a single motor.

Liked this? Then take a look at the rest of San Francisco’s speciality coffee scene with the Coffee Spot Guide to San Francisco.