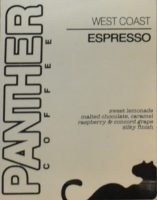 Long before I ever visited Florida/Miami (or, indeed, had plans to), one name in speciality coffee stood out: the subject of today’s Meet the Roaster, Panther Coffee. When I found myself on a business trip to Miami, with next-to-no-time to explore, it was the one place that I decided I had to visit. As luck would have it, our team dinner, on my last night in Miami, was at the Wynwood Kitchen & Bar, just two blocks north of Panther on NW 2nd Avenue. I took this as a sign, and, getting out of the meeting slightly early, I jumped in a cab and made a beeline for the Wynwood District.

Panther was established five years ago and while it now has three branches, this one (Wynwood) is the original. As well as being a rather nice coffee shop (which now features as a Coffee Spot in its own right), Panther roasts all its coffee here, on a vintage, 1927 Perfekt roaster. However, change is afoot since the roaster is nearing capacity and Panther has plans to move to a new roasting facility, where it will install a 22kg version of the same machine. So, come down while you can if you want to watch the coffee being roasted in-store.

The compact roasting area sits beyond the end of the counter, occupying the far (left-hand) end of the coffee shop, separated by a waist-level railing. The area immediately outside the roastery is set aside for people waiting to collect their coffee, which makes sense. However, it’s shame that there’s no seating down there, which means that you can’t easily sit and watch the coffee being roasted.

At the heart of Panther Coffee is an amazing, vintage Perfekt coffee roaster which dates from 1927, making it 90 years old. With the exception of Otto, Amid Giants & Idols’ venerable Swadlo roaster (whose age is uncertain), this is easily the oldest roaster I have ever seen that’s still in working order. Like the Probat at Sightglass in San Francisco, the Perfekt has a pair of external chains which drive both the cooling fan and the rotating roasting drum, although the Perfekt’s are covered with a metal housing, which, I guess, is far safer!

Panther obtained the Perfekt from Lighthouse Roasters in Seattle. As well as being a coffee shop/roaster, Lighthouse also deals in vintage roasters/espresso machines and was responsible for refurbishing the Perfekt. The most noticeable difference from the original is that it now runs on natural gas, but, other than that, it’s remarkable unchanged.

Panther has been roasting for five years, during which time it’s seen a considerable shift in Miami’s coffee tastes, with Panther leading from the front, developing more acidic and lighter roasters. During my tour of the roastery with Mike, the head roaster, we talked about the difficulties of developing a coffee market, where you can never get too far ahead of where your customers tastes are.

To that end, Panther roasts five espresso blends. Two of these, the more traditional East Coast, and the funkier West Coast, are served in-house, while the other three, 1927 (named with a nod to the roaster), 1985 and Legacy, are more old-school and aimed at various of Panther’s wholesale customers (as well as roasting for all its own stores, Panther has a large wholesale business, supplying customers up and down the coast).

The precise components of each blend vary with season, but the aim is to produce a consistent flavour-profile all year round. This is very evident with the East and West Coast blends, where tasting notes feature heavily on the packaging and information sheets, but with no mention of the origin or of the components of the blend. Having tried both, I can confidently say that they are excellent, with the East Coast offering a more balanced, traditional espresso, while the West Coast definitely has more complexity and character to it.

In addition to the blends, Panther roasts between six to nine single-origins at any one time. These are true seasonal lots of various sizes: once they’re gone, they’re gone. As well as using various green bean importers, Panther has relationships with farms in Brazil, Nicaragua and El Salvador, with these countries featuring heavily in its output.

I counted seven single-origins while I was there, two each from Nicaragua, El Salvador and Brazil, with just a single African coffee (from Ethiopia). Each coffee comes with extensive origin and tasting notes on the menu, while even more detailed information sheets hang underneath the counter for those who wish to know more.

January 2018: you can also see what I made of Panther Coffee’s Coconut Grove branch.