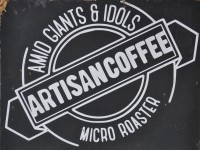 Halfway between Dorchester and Exeter, the Dorset seaside town of Lyme Regis is not somewhere you would stumble upon by accident (the A35, the main Dorchester-to-Exeter road, runs a few miles inland, requiring a very deliberate detour to reach Lyme Regis). With a permanent population of less than 4,000 people, it’s not somewhere you’d expect to find one of the country’s best speciality coffee shops either, but tucked away halfway up a hill on Silver Street, there’s the wonderful Amid Giants & Idols.

A warm, friendly place, run by the lovely Xanne, stepping into Amid Giants & Idols is a bit like popping round to her place for a cup of coffee and a slice of cake, where she entertains you in her (slightly) over-sized sitting room. It really is that cosy and informal. If that’s all there was to Amid Giants & Idols, then it would be a pretty special place, but add to that some wonderful coffee, as good as you’ll find, and you’re onto a real winner. That it’s all roasted (with passion, as it says on the A-board outside) on a vintage Swadlo roaster in a shed at the back of shop, is an unexpected bonus.

Lyme Regis has a lot of hills. So, unless you park in one of eight spots across the road by the library, you’ll have some climbing to do. Trust me though, it’s worth it. Occupying the ground floor of half of a nondescript brick-built building, Amid Idols & Giants doesn’t immediately leap out at you, although it’s not shy with its claims, both A-board and windows proudly proclaiming its coffee credentials.

The plain shop-front has double-doors with large, floor-to-ceiling windows on either side. The left-hand window is at street-level, but since it’s on a hill, the right-hand window’s a couple of feet above the pavement, allowing for a cheeky outdoor seat on the window ledge. The frontage is enlivened by fairy lights in both windows, while the left-hand one also contains a rocking horse. Indeed.

Inside, you’re greeted by one of the cosiest, welcoming interiors that I can recall, on a par with, say, Vauxhall’s Tea House Theatre, although they’re very different places. Everywhere you turn, there are comfy chairs: lovely leather armchairs, fancy wicker ones, and a couple of tempting sofas. These are in four clusters, two on the left, two on the right, each seating three or four people. Artwork adorns the walls and there’s a lovely (working) fireplace to the right, a large mirror above it.

The counter’s at the back, on the right-hand side, stretching two-thirds of the way across the room. There’s just enough space for the bulk of the two-group La Marzocco espresso machine, a pair of grinders and a couple of displays. To the left of the counter, there’s another sofa up against the wall, the menu above it. Beyond this, a door in the back wall leads to a little bar against the left-hand wall. There are a couple of bar chairs here and multiple power outlets so that you can charge your phone/laptop.

This is also leads to the toilet and out to the garden, which, sadly, is off limits. A shed in the garden houses Otto, Amid Giants & Idols’ venerable Swadlo roaster who will feature in his own Meet the Roaster.

Xanne roasts all the coffee, Amid Giants & Idols having two espresso and two filter options, which change every month or two. During my visit, all four were single-origins, including a Colombian Guadalupe, which was available as both espresso and filter (different roasts). Naturally I had that, starting with a V60 pour-over, which came, surprisingly, with a timer. This, Xanne explained, was to allow the coffee to cool before I poured it into my cup. While a fan of letting filter coffee cool, I’ve never seen it taken to these lengths before!

However, it worked! It was a gorgeous cup of coffee, smooth, very drinkable and with subtle, complex flavours that evolved as it cooled. Next I tried the espresso roast, first as a piccolo, but it was less to my taste. The coffee had a sharpness to it that, in milk, gave a slightly discordant note. However, as a straight espresso, it tasted very different again. The coffee, no longer at odds with the milk, was much more to my taste, the sharpness shining through. Hard to believe all three were the same bean though, given the range of tastes, but that’s all part of the magic.

December 2015: Amid Giants & Idols has won the Most Unlikely Place to Find a Coffee Spot Award.