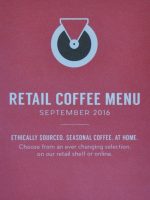 Not long after I visited the original Hot Numbers on Cambridge’s Gwydir Street, back in September 2014, a new roastery/café was announced. Sadly it took me almost two years to get back to Cambridge to check it out, finally returning in June last year and again in September. This post is about the café-side of Hot Numbers, with the roastery appearing in its own Meet the Roaster feature in due course.

It’s all very different from Gwydir Street. Whereas that’s a large, open space, Trumpington Street is long and thin, with the counter at the front on the right and seating down either side. Looking at it, it’s a miracle that Hot Numbers managed to squeeze a roaster in, but it did, tucked in on the right-hand side at the back.

All the usual Hot Numbers coffee goodness is here, with two single-origins and a decaf available on espresso and two more on pour-over, plus a fifth on bulk-brew. There’s also lots of technology on show: a Sanremo Opera espresso machine, Mahlkönig Peak grinders & Marco Beverage Systems SP9s. These are backed up with a selection of loose-leaf tea, craft beer, wine, a small but decent food selection and some excellent cake choices.

The new (for me, at least) Hot Numbers presents a small profile at the southern end of Trumpington Street, although if you approach from the north, you get more of a feel for its size, since you can see that it goes a long way back, with windows punctuating front half of the left-hand side. This means that although it’s long and thin (perhaps the longest Coffee Spot, compared to its width, that I’ve ever visited), it’s a very bright space, with light from the windows at the front and sides, as well as more light right at the back.

Returning to the front, it’s a simple affair, with the door recessed between two windows. There are benches outside in front of either window, while inside, there are small bars in both windows, complete with stools for seating. A bench runs along the left-hand side, with two large tables in front of it, while on the opposite side is the counter, which is slightly back from the door, leaving space for a little nook to the right of the door with a bench and coffee table. You can also sit at one of several stools at the front end of the counter and watch your coffee being made.

Beyond the counter, Hot Numbers narrows. There are a pair of small, round tables to the left, and a large, communal table on the right. It then narrows again, to accommodate the roastery on the right, which is in its own long, thin space, visible through a doorway on the right. Down the left, a corridor-like space runs right to the back of Hot Numbers, with a bar against right-hand (roastery) wall, and a bench with small, round tables to left. Finally, right at back, there’s doorway to comparatively large, open garden, which also houses the toilets.

Hot Numbers only roasts single-origins, with a choice of two (Ethiopian/Guatemala for my latest visit) on espresso, another (Burundi) on bulk-brew filter and two more (a different Ethiopian and a Kenyan) on pour-over. Hot Numbers even takes its decaf seriously enough to list its origin (Brazil Santa Lucia) on the board along with everything else.

When I visited in June, I had a pour-over which was beautifully presented in a carafe with a cup on the side. Back then, Hot Numbers was using Syphons and Clever Drippers, but by my return in September, these had been replaced by a pair of Marco Beverage Systems SP9s, which, the baristas told me, had massively improved the work-flow.

I’d already tried the espresso at Gwydir Street, which is just as well since I couldn’t resist putting the SP9s through their paces. While I’d had coffee from an SP9 at coffee festivals, this was the first time I’d tried one in a coffee shop and it didn’t disappoint. I had a Kenyan through the V60, a juice brew with a touch of acidity. How much is down to the coffee itself or the SP9 I don’t know, but you can’t extract what’s not there, only make a mess of it, so in that sense the SP9 passed its first test. Another sign of a good coffee is that it holds its own as it cools. In this case, my coffee was still as juicy down to the last drop!

December 2017: Hot Numbers was a runner-up for the 2017 Best Roaster/Retailer Award.