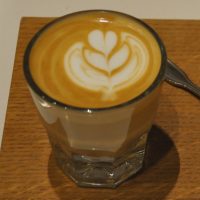 Once again, I find myself following in the footsteps of Bex of Double Skinny Macchiato. Saint Frank Coffee, in San Francisco’s Russian Hill area, was the very last stop of my final day-trip to San Francisco, part of my epic four-corners trip around America at the start of the year. It had been a good day, starting with a visit to Four Barrel in the Mission and ending at Saint Frank, both recommendations from Bex.

Founded in 2013, Saint Frank’s a relative newcomer to San Francisco’s speciality coffee scene. This is its flagship store, with two other outlets, one on the Facebook campus (sadly, employees only) and a new venture, called St Clare Coffee, in the Mission (which sadly, has since closed). Saint Frank roasts all its own coffee (sadly off-site), working directly with a small number of coffee farmers around the world.

Saint Frank Coffee occupies a long, high-ceilinged space. Done out in white and pale wood, it has a clean, not-quite-clinical look, very different from the post-industrial, warehouse look of the likes of Sightglass and Sextant, which seems to dominate the San Francisco’s speciality coffee scene. The front, which faces west onto Polk Street, is dominated by a massive big picture window on the left, while the door, also glass, is recessed on the right.

Saint Frank is surprisingly wide, only seeming narrow in comparison to its great depth and height (it is possibly taller than it is wide). There’s enough space for two tables outside on the pavement in front of the window, which also houses a three-seat window-bar inside, although you could probably squeeze four or maybe five stools in if you wanted to. Then again, uncluttered seems to be a watch-word for Saint Frank.

There’s a retail shelf on left-hand wall, then comes the counter, a massive affair, all sweeping lines, which occupies most of the left-hand side. There’s a short section facing the window, which houses the three espresso grinders, then comes an elegant curve which houses a glass display case for the cake, the menus neatly displayed on the glass top on clipboards. The long sweep of the counter continues, running lengthways down the store, punctuated by the twin group heads of the espresso machine, the two tills, two more group heads of the second espresso machine and, finally, the tall, black cylinders of a pair of SP9s. Everything, it seems, comes in twos at Saint Frank.

A long bench runs along the right-hand wall opposite the counter, six two-person tables lined up against it. Then, at back, two high, four-person tables jut out from the wall. Above these is a small mezzanine area, accessed via steps on the left, which holds two four-person tables, the only part of Saint Frank where you’ll find chairs. The ludicrously high ceilings, the windows at the front, twin skylights in the middle and at the back of the ceiling, and the uncluttered layout, all combine to give Saint Frank an unparalleled sense of space.

The coffee used to be roasted (by Saint Frank) at Ritual, another San Francisco legend, but at the start of the year, Saint Frank moved into its own dedicated roastery. The single-origin filters change every two/three weeks, using coffee from Honduras, Guatemala and Kenya. Saint Frank uses Kalita Wave filters with its SP9s, serving your coffee in a carafe with a cup on the side.

Tempted as I was, I was drawn to the espresso system, custom-built by a local engineer when Saint Frank opened in 2013. Although looking similar to the Mavam and Modbar modular systems, each machine is a single unit, boilers and pumps below the counter, connected directly to the twin group heads and steam wands, leaving the counter-top wonderfully clear.

There’s a seasonal blend (Little Brother), with a single-origin which changes every week. Undecided, Lauren, my barista, recommended a split shot of the single-origin, a Guatemalan Las Palomas. This arrived, beautifully presented, on a wooden tray. It went well in milk, where it was very smooth, coffee and milk complimenting each other perfectly. However, I preferred it on its own, where I found it beautifully well-balanced with a great mouthfeel. I was struck by rich, chocolately notes, particularly on the first sip.

I paired this with an outstanding cornmeal galette, with an apple and date filling, the perfect combination of sweet and savoury. The rich, cornmeal pastry had a sweet layer of dates (a bit like jam), topped with chunks of apple.

July 2022: On my return to the Bay Area, I visited the new (to me) Saint Frank Coffee in Menlo Park.

You can see what fellow-blogger Bex, of Double Skinny Macchiato, made of Saint Frank when she visited as part of her own one-day whirlwind tour of San Francisco.