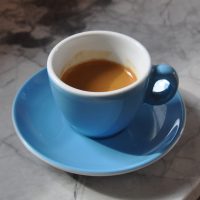 On the edge of Whitechapel, a stone’s throw from Aldgate and Aldgate East tube stations, stands Treves & Hyde, simultaneously a coffee shop, restaurant and bar, all tucked underneath the Leman Locke apartment hotel. I always thought that the coffee shop part of Treves & Hyde was in a basement, so I rather surprised to find it on the ground floor, with the restaurant on the first floor. I couldn’t tell whether I was disappointed, because I really like basements, or pleasantly surprised, since it’s such a lovely space. Probably both, in equal measure.

However, the real draw (for me, at least) is that Treves & Hyde has the UK’s first Mavam espresso machine (there’s now a second at Tab x Tab in Westbourne Grove). One of the new breed of modular espresso systems, the Mavam’s bulk is hidden, tucked away below the counter, leaving only the group heads and steam wands to rise gracefully from the counter top. This leaves an open, uncluttered counter, in keeping with the coffee shop’s dual purpose of serving beer, wine and cocktails alongside the coffee. For those less geeked-out than me, Treves & Hyde serves Volcano Coffee Works’ Full Steam espresso, along with a decaf from Old Spike Roastery, plus a single-origin on bulk-brew.

Treves & Hyde occupies a gloriously bright space at the northern end of Leman Street. Long and thin (well, wide and shallow), it’s effectively glass on three sides, the long side facing the street. Probably twice as wide as it is deep, it’s also extremely tall, the ground floor perhaps twice the average height. Six narrow floor-to-ceiling windows line the front, more windows running down either side.

There’s outdoor seating, well set-back from the busy street on the broad pavement, separated from passing pedestrians by strategically-placed planters. Four thick, round, concrete pillars, one at either edge and two in the centre, support the slightly-projecting upper floors, which in turn provide partial shelter to the outside seating.

The door’s on the left, a glass affair in the lower half of the left-most window, giving access to both coffee shop and, via the coffee shop, restaurant. The counter’s directly ahead of you, stretching out to your right, the black, angular lines of the Mavam espresso machine immediately catching your (well, my) eye.

There’s plenty of seating options, starting with two round, comfy chairs immediately to your left in the corner by the door. You can also sit at one of four bar stools by the counter, either at the front, backs to the door, or down the counter’s left-hand side, which runs parallel to the windows down the side of the building. These are slightly in the way of people coming in and out, but are ideal if for watching the Mavam in action.

The remaining seating’s off to the right, with a pair of two-person window bars beyond the counter, followed, at the back, a cosy cluster of seats. These are partially under the spiral stairs which occupy the front-right corner and lead the first-floor restaurant. There are three pairs of comfy chairs, each with its own small, low, round table, while over by the window are two massive comfy chairs, with a third, smaller one.

Unusually, between the seating (right) and counter (left), a corridor leads back, giving access to the lifts and, beyond them, to the foyer of the Leman Locke apartment hotel, which occupies the upper floors. Although you can come in through the back, plenty of people decided to use Treves & Hyde as an entrance, so there are always people coming and going.

Treves & Hyde serves its coffee from a commendably short menu which eschews names in favour of sizes (4oz, 6oz or 8oz with or without milk). Talking of milk, there’s a choice of Bonsoy, Oatly or full-fat milk from Estate Dairy. Alternatively there’s bulk-brew filter from the guest roaster.

Naturally I had to have an espresso, and while Volcano Coffee Works’ Full Steam espresso held no surprises, it was a beautifully pulled, well-balanced and well-rounded shot, a very fine espresso indeed. I paired this with one of the pastel de nata, which was just as good, with a really rich and creamy custard, and a crunchy, chewey (in a good way) pastry case.

For an alternative view of Treves & Hyde, you can see what fellow blogger Bex (of Double Skinny Macchiato) made of it, including her report on brunch up in the restaurant. Reading Bex’ piece, I rather feel I rather missed out by visiting late in the afternoon…