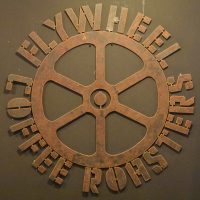 Although Flywheel Coffee Roasters is physically removed from the third wave hub of The Mission/SoMa, it’s not that far away, at the eastern end of Golden Gate Park, an ideal spot for a coffee stop before or after some serious touristing. However, in terms of look and feel, with its long, thin industrial interior, coffee shop in front, cast iron roaster at the back, it fits right in with the Sightglasses, Sextants and Four Barrels of San Francisco’s speciality coffee scene.

The spacious interior is lovely, the coffee even more so. All roasted twice a week in the back of the store on a 15 kg Joper from Portugal, there’s a blend and decaf on espresso (occasionally joined by a single-origin), served from a cut-down espresso-based menu. In contrast to the relatively old-school roaster, the espresso machine, a Mk II Slayer, is about as cutting edge as they come.

If you fancy something different, there are four seasonal single-origins on filter. Refreshingly, there’s no batch-brew. Instead everything’s available through either the V60 or, unusually, the syphon, something which I only see in a handful of coffee shops. If you’re hungry, there’s a small selection of cake, and that’s it.

Flywheel Coffee Roasters, which opened in 2012, is on Stanyan Street, which runs north-south along the eastern end of Golden Gate Park, which you can see from Flywheel’s front windows. At the end of a terrace of four-storey brick-built townhouses, Flywheel occupies the ground floor of a three-storey building that feels like it’s been tacked on as an afterthought before the car park to the supermarket, Flywheel’s neighbour on the other side.

The simple store front, with broad, tall windows flanking a central glass door, belies the spacious interior. You can sit outside, each window sporting its own two-person bench underneath, sheltered under a projecting upper floor, although your best option may be to head inside. Flywheel stretches back for a distance of maybe five times its width, the high, open ceiling adding to the sense of space, as does the relatively uncluttered layout.

The look and feel is best described as industrial, although it’s concrete rather than the exposed brick I associate with the roasters of The Mission/SoMa. While the front is all glass, the fog rolled in as I arrived, the light levels best described as atmospheric, particularly as you ventured further inside.

Beyond this is a large counter on the left, with more seating on the right. The counter’s short side, where you’ll find the three bar stools next to the cake in a glass-walled display case on the corner, faces front. These are ideally placed to watch the action taking place along the counter’s long side. First comes the till, then the Mk II Slayer espresso machine and finally, the filter area, set slightly back from the espresso machine, with four V60s and three syphons.

Opposite the counter is a long, high-backed wooden bench with five square two-person tables, followed by two high, four-person tables projecting from the wall. Beyond this is a staff-only mezzanine level, stairs leading up to the left from the end of the counter, with roaster and more seating tucked underneath. There’s a six-person, L-shaped bar on right, enclosing the roaster, while on the left, after the restroom, is a production area with sacks of green beans and tubs of roasted ones. Beyond this, in an open space on the left, is a single, four-person table.

The final seating is outside, through a door flanked by half-height windows in the back wall. This enclosed area has a sloping Perspex roof and wooden decking. Three two-person tables run along the back wall, benches to either side. A simple, backless wooden bench is on the left, with a high-backed concrete affair on the right, old barrels and a tree stump acting as tables.

Since I rarely see the syphon as a preparation method, I went for that, asking for a recommendation, which duly came: the Ethiopia Deri Kochoja. Served in the bottom part of the syphon, it was handed over, stand and all, along with a warning that it was very hot!. I was also told to leave it to stand for five minutes, which was sound advice. Finally, I was handed a lovely double-walled glass to drink from.

My coffee was very good, but not quite what I was expecting, having a surprising amount of body. I was too caffeinated to try it as a pour-over, so left wondering how it would compare. Maybe next time!