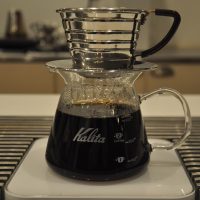 Wrecking Ball started life as a coffee roaster in San Francisco around 10 years ago. However, the coffee shop is a relatively new venture, having only been open for a couple of years when I visited in February 2017. It’s in Cow Hollow, slightly off the beaten track for the average tourist, west of North Beach/Russian Hill. However, it’s easy enough to get to on one of the many bus routes that criss-cross the city.

The coffee shop is an interesting space, underneath an old townhouse in what, I believe, was the parking garage. This gives it very much a basement feel, although it is directly accessible from the street via a long, corridor-like passage that slopes slightly upwards. It’s easily the smallest of the speciality coffee shops I visited on that trip, with three benches and three chairs inside and three small tables on the pavement outside. I admire the consistency!

As you might expect from one of San Francisco’s leading roasters, there’s a range beans for sale or to try, with a blend on espresso, along with decaf, and several single-origins, two of which are available as pour-over (Kalita Wave), one on cold brew and another on bulk-brew.

On the southern (ie shady) side of Union Street in Cow Hollow, Wrecking Ball can easily be missed, with its modest store front under a flight of steps which lead up to the townhouse above. The thing that most easily gives it away is the row of three small tables, each flanked by a pair of chairs which face the street. The entrance, which consists of a large, square window, with a door in the right-hand side, is at the left-hand end, under the balcony at the top of the steps.

The door leads to a long, wide corridor which runs back under the house, sloping slightly upwards. There is a flight of three stepped benches on the left, each slightly higher than the one before, matching the gradient of the corridor. These make up the bulk of the interior seating and is pretty unique: I can’t think of another coffee shop with seating like this.

The corridor leads to a basement-like area at the back. Alternatively, depending on your point of view, the corridor just gets a bit wider on the right. Either way, this is the main space, dominated by a large, L-shaped counter which runs along the back and down the right-hand side. The till and cakes are at the back, the espresso machine, a two-group La Marzocco Strada, is in the corner at 45⁰, while the right-hand part of the counter is given over to pour-over, with a custom-built set-up including built-in scales. You’ll find the last of the seating here, three chairs, one for each set of scales.

The interior is very modern, with a clean, austere white décor, enlivened by some magnificent wallpaper on the left-hand wall of the corridor. Despite this modernity, the building is quite old (by San Francisco standards), something which is revealed by a closer inspection of the back wall.

This, by the way, is just a coffee shop. Wrecking Ball roasts in a large facility inside what I think is an old warehouse on Folsom Street, roughly equidistant between Sightglass and Sextant. I had wandered past a few days earlier without quite realising where I was and spotted the roaster through the open doors. Sadly, you can’t go in, but you can (literally) say hello.

Normally there are two baristas on duty at the coffee shop, but when I popped in, one of the staff members was new, so there was a third barista there, providing training. I’d caught them at a quiet moment and so was the only customer. Never have I felt more outnumbered by the staff!

Naturally I took a seat at the brew-bar and ordered a pour-over (Kalita Wave). The two choices, which change every month or two (basically when the current one runs out) were a Huehuetenango La Sierra from Guatemalan and a Sulawesi Toraja Toarco Jaya from Indonesia. I selected the Sulawesi, which was made using a continual top-up pouring method (see the gallery) and served in a mug. It had plenty of body, but was smooth, subtle and well-balanced, holding its own even when cold. It also made a change from the Ethiopian and Rwandan coffees that I’d enjoying on the trip. In fact, on a trip dominated by African coffee, it was great to see Wrecking Ball offering some different origins.