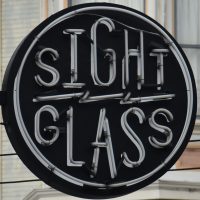 The original Sightglass Coffee Bar & Roastery on Folsom Street was a highlight of my first Coffee Spot visit to San Francisco in 2017. Back then, Sightglass just had one other coffee shop (on 20th Street in The Mission), but it’s since expanded with a shop in Los Angeles and another in San Francisco, in The Haight, on the corner of Divisadero and Page Street. This opened not long after my 2017 visit, but somehow the news had passed me by, so it was completely by chance that I spotted it on the other side of Divisadero while wandering in the neighbourhood.

A large coffee shop, although not as large as the original coffee bar & roastery (which is huge), there’s plenty of seating in the spacious interior, while you can also sit outside on one of four benches which protrude, step-like, from the left-hand side of the shop as it climbs up Page Street. The coffee features Sightglass’s ubiquitous Owl’s Howl blend plus decaf on espresso, while if you want filter, there’s a single option on batch brew along with two on pour-over through the V60. There’s also a selection of cakes and a concise lunch menu.

Sightglass Coffee is on the ground floor of a beautiful old building on the corner of Divisadero and Page. Dating from 1903, the store has a relatively broad front facing Divisadero, but the secret to its size is that it goes a long way back along Page Street. Meanwhile, the upper floors, which look to be apartments, have elegant, projecting bay windows. Wide double doors are recessed in the middle, flanked by two sets of three tall, elegant windows. On the right, the middle window is a to-go hatch, a short, wooden shelf to the left, allowing you to order without setting foot inside, although if you do, you’ll be missing out.

If you do go inside, be sure to pause on the threshold, look down and admire the mosaic floor. Carrying on, you enter a single large room, almost as tall as it is wide and about twice as deep. The seating is on the left, while the irregularly-shaped counter is on the right, the till ahead of you. A long, central aisle between the seating and the counter has been kept clear all the way from the door to the steps down to the restroom at the back.

Although the building is old, the interior is a modern refit, with plain, plastered walls and ceiling, along with a tiled floor. While smaller than the original Sightglass Coffee Bar & Roastery, it has a similar sense of space. It lacks a mezzanine, although it could easily accommodate one above the seating on the left, which is arranged in three bays running front-to-back. Each bay has two fixed tables of various sizes/shapes, seating provided by a combination of benches (most with padded backs) and low stools.

The counter starts immediately to the right of the door with a large retail section, followed by the cakes and pastries. It then projects into the space by 45°, where you’ll find the tills and lunch menu, before straightening out to house the first of two Kees van der Westen Spirit espresso machines (the third/fourth I seen that day, having already visited Spro Coffee Lab and Verve). The second Spirit is on the next section of counter, with ducks in at 45°, before straightening out for the last stretch, home to the pour-over station, with the open food preparation area beyond that. There’s also a pillar opposite with a small, wrap-around counter acting as a water and takeaway station, plus a sunken tray for dirty dishes.

After a day of espresso, I wanted pour-over, with a choice of a Tanzanian or Rwandan single-origin. I took the barista’s recommendation (Tanzania), which was served in a distinctive, smoked-glass cup. A rich, full-bodied coffee, quite different from the lighter roast single-origins I typically enjoy, I really liked it, especially as it cooled, when the flavours matured. Suitably recharged, I continued on my way to climb Buena Vista Park.