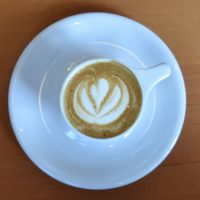 Verve Coffee Roasters, the international coffee shop/roaster chain, is primarily California-based. Starting in Santa Cruz, where it has four outlets, including its flagship Pacific Avenue store, it’s spread to Los Angeles (three, soon to be four¸  locations), San Francisco, and across the Pacific to Japan, where there are now three outposts. Having visited its Omotesando store in Tokyo last year, and its Spring Street location in Los Angeles earlier during this trip, calling in on today’s Coffee Spot, Verve’s solitary San Francisco location, meant that I’d visited all four cities where Verve has stores. Except that Verve is also in Kamakura in Japan. Bugger. Oh well, I’ll be in Japan later this year…

You’ll find the usual coffee options, the Streetlevel seasonal blend joined by the featured espresso (another blend, Sermon, during my visit) and decaf, all the shots pulled on a custom four-group Kees van der Westen. Meanwhile, the batch-brew option is joined by three single-origin pour-overs through Kalita Wave filters using the Modbar modular system. If you’re hungry, there’s a small brunch menu until two o’clock, with cake/pastries served all day. All the coffee’s available in retail bags, along with a selection of merchandising and coffee equipment.

Occupying a narrow rectangular space, long side running along Market Street, its front, left-hand corner is cut off by Church Street, resulting in a small wedge that terminates with a wide, glass door at the junction of the two streets. If you don’t make it any further, there’s an open space here, with a bench to the right, beyond which a couple of broad steps lead up into the coffee shop.

The counter is set back on the left, running maybe half the length of Verve, with an enclosed kitchen beyond the far end. The seating, meanwhile, occupies the right-hand side (Market Street). There are two broad, arched windows on the left and four on the right, making for a very bright space (the shop used to be an optometrist before Verve opened).

On the left, a large retail selection occupies the space between the two windows, the second window behind the counter, which has a fairly unorthodox shape. The left-hand end faces the door, perpendicular to the wall, twin tills flanking the display case for the cakes. It then takes a 45° turn to run parallel to Market Street, where you’ll find the three espresso grinders and custom four-group Kees van der Westen Spirit espresso machine, with three Modbar pour-over modules at the far end.

The seating, on the Market Street side, is split into two distinct areas, both occupying two of the broad, arched windows, separated by a second door which provides step-free access from Market Street. It’s also conveniently located opposite the collection point, which is by the pour-over modules, so you can enter at the far end, order at the till, collect in the middle and leave via the second door.

Alternatively grab a seat if you can, with the first seating area, opposite the counter, proving particularly popular. There’s a standing bar at either end, with another in the right-hand window, while the left-hand window has a single-person table. Finally, running parallel to the windows down the centre is a low, four-person table.

The second seating area, opposite the kitchen, has a single, wide C-shaped bay of padded benches, its back to Market Street, with eleven small, square wooden coffee tables which double as additional stools if required.

Having had a pour-over and the Sermon blend (as a one-and-one) the previous weekend at Spring Street in Los Angeles, I tried the Streetlevel blend, also as a one-and-one. I’d had it before, most recently at Fourtillfour in Phoenix, but that was over a year ago.

As an espresso, it was smooth and well-balanced, developing more acidic notes on the second and third sips. Meanwhile, in milk, it was excellent, a single-shot topped up with milk in an espresso cup being pretty much the perfect ratio (my taste has definitely developed over the last six years: there was a time I’d have said the flat white was the perfect ratio!). Together, espresso and milk combined to produce a rich, smooth, creamy drink, a very welcome introduction to both Verve and San Francisco.