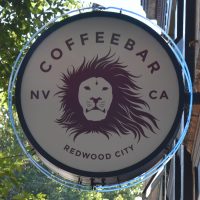 Coffeebar is an interesting coffee shop/roastery chain spread across a diverse set of locations in California (four) and Nevada (Reno). Founded in 2010 in Truckee, California (which I passed through on the California Zephyr in 2019), the original coffee shop is still there, where it’s been joined by a bakery, although the roastery is now in Reno (which l also passed through on the California Zephyr). From that eastern base, Coffeebar spread to the Bay Area with two locations on the peninsula, Menlo Park, which arrived in 2018, and the subject of today’s Coffee Spot, Redwood City Coffeebar, which opened in September 2019.

Located on Broadway, a short walk from the Caltrain/bus station, it’s a lovely spot in an old, high-ceilinged building providing plenty of space, with as much seating outside under the shade of mature trees lining the pedestrianised street. Coffeebar offers the Zephyr blend and Prima Donna decaf on espresso, while there are two blends on batch brew, the dark roast Giuseppe and a rotating lighter roast (Trailhead during my visit), plus three single-origins on pour-over through the Kalita Wave/Modbar. There’s also tea, beer, wine and, if you’re hungry, breakfast, lunch and a range of cakes and pastries.

Redwood City Coffeebar is on Broadway, a pleasingly wide street running east-west through the heart of Redwood City. The section from the Old Courthouse (west) to the junction with Main Street (east), is pedestrianised, enabling Coffeebar and its neighbouring restaurants and cafes to spill out onto the street. Coffeebar has made full use of this, with about 10 tables loosely arranged on the broad pavement, with a few extending onto the street itself, roughly bounded by a pair of octagonal planters, one on either side of Coffeebar, which is on the north side of the street.

Each of the planters, part of a row that line the street (with a similar row on the southern side), is home to a large, mature tree. These combine with their neighbours to form a near-continuous green canopy across the street, providing shade for the tables. Coffeebar occupies the Fitzpatrick Building, which was built in 1905 and which, at one time, was home to Youngs, a drug store and stationers.

The front of Coffeebar is almost all glass, with the door slightly recessed in the middle, flanked by a large square window on either side. Along the top, three panels of coloured glass bear the words “Drugs”, “Youngs”, “Stationery” (reading left to right). Inside, Coffeebar occupies a single, large space, with the seating arranged in an L-shape along the left-hand wall and across the front (where it’s interrupted by the door), while the counter mirrors it, running down the right-hand side (where you order) and across the back (where the coffee is made and where you also collect your drinks when they’re ready, along with online orders), leaving the middle of the space clear.

The seating is a mix of individual two- and four-person tables, along with a single, large six-person communal table against the left-hand wall towards the front. The counter starts on the right, about a third of the way along the wall, leaving space for fives tables to the right of the door, starting with a two-person table in the window and followed by two rows, each with two tables.

You order along the right-hand side of the counter, where you’ll also find various display cases for the cakes and various soft drinks, along with menus on the wall. Meanwhile, running parallel to the counter to your left is a retail and merchandising section, where you can pick up bags of any of Coffeebar’s blends or single-origins.

Once you’ve paid, shuffle along to your left, where the counter runs across the back of the space, ending just short of the left-hand wall. This is home to a three-group Modbar installation, along with two pour-over modules, which makes it a great place to watch your coffee being made while you wait. I’d ordered a pour-over, going with the Edilma Loaiza from Colombia, the barista’s recommendation (the Rutas del Inca from Peru and the Masha, from Burundi, were also available). I had great fun watching the Modbar do its magic, making my coffee using a Kalita Wave filter.

The resulting coffee was served in a carafe, along with a lovely, handleless ceramic cup, both presented on a small wooden tray. Promising much, it more than delivered, a bold, fruity brew which more than held its own as it cooled, allowing me to linger over my coffee as I sat outside in the sun. I paired it with a biscotti which was crumblier than I’m used to, but which made it a lot easier to eat without breaking my teeth! Fully refreshed, I set off to the station to catch the Caltrain back to Sunnyvale.