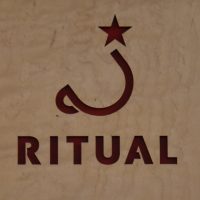 Ritual Coffee Roasters a veteran of San Francisco’s speciality coffee scene, going strong since it opened its Mission location on Valencia in 2005. A roaster/coffee shop chain, I’ve had its coffee in various places across the USA, but until now, the only other location I’ve visited is Hayes Valley, when I was in San Francisco in April last year.

The Hayes Valley location is part of Proxy, occupying one of a handful of shipping containers, offering an impressively-full range of coffees despite its small size. In contrast, its original location in the Mission is a large, open space, with a distinctly minimalist vibe, a complete contrast to the stereotypical San Francisco exposed brick industrial spaces such as Sextant Coffee Roasters and Sightglass.

The focus is firmly on the coffee, with a blend (Emperor’s Cup), single-origin (Monte Álban, Mexico) and decaf (Los Gigantes, Colombia) on espresso, plus multiple single-origin filter options, including batch brew (La Folie, Guatemala) and three choices for the V60. Finally, there’s cold brew, nitro cold brew and a seasonal cascara drink. The coffee choices change seasonally, with all the beans (and more) available in retail bags. If you’re hungry, there’s a small selection of cakes and pastries.

Ritual Coffee Roasters presents a simple façade on the west side of Valencia, a central, recessed glass door with a pair of near floor-to-ceiling windows on either side. There’s a long wooden outdoors seating area on the opposite side of the pavement, offset to the left, enclosed in what looks like one half of the hull of a boat.

Inside, Ritual goes a long way back, which, coupled with the very high ceiling, gives it great a sense of space, enhanced by the minimalism of the layout, which is split into three distinct zones. The front fifth of the shop is given over a small seating area, with the counter occupying the next two fifths, while the rear two fifths has a second, larger seating area.

Starting at the front, there’s a tall, three-person window-bar with stools on the right, the wall housing in-built retail shelves. Meanwhile, on the left, a built-in wooden bench runs in an L-shape under the window and then down the wall. There’s a four-person table in the window and four two-person tables along the wall.

The counter comes next, occupying the right-hand side of the store, with a long, standing bar opposite it against the left-hand wall, mostly used by takeaway customers waiting for their coffee. The counter begins after the retail shelves, projecting from the wall for a short way at the conventional 90° angle, which is where you’ll find the pour-over set up. It then turns at a 30° angle for a short way, housing the display case for the cakes and pastries, before another 90° turn, where you’ll find the till.

The main section of the counter then runs towards the back of the store at an angle of 30°, getting evert closer to the wall. This is the domain of the espresso machines, with three white Mazzer grinders followed by a matching three-group Synesso, then a two-group Synesso and grinders. You collect your coffee from the gap between the two Synessos, with a water station right at the end.

The final two-fifths of Ritual starts with a broad, three-person bar extending from the left-hand wall, seats facing forwards. Behind this, a long, 14-person communal table runs front-to-back, while opposite, against the right-hand wall, four two-person tables are arranged nose-to-tail. Finally, there’s a large window on the left-hand side of the back wall, looking out into a narrow, plant-filled light-well, a long bench in front of it.

Despite windows front and back, the lighting’s best described as subdued, while the décor is minimalist, a whitewashed wall on one side and light wood panelling, matching the light wood flooring, on the other. The only decoration I saw were a series of works of art along the whitewashed left-hand wall.

I’d decided to have a pour-over, my first of the trip, partly in contrast to the espresso-based drinks I’d had at Hayes Valley last year. There was a choice of three single-origins, from Kenya, Ethiopia and Colombia. Normally I’d be drawn to either Kenyan or Ethiopian, both of which had classic, stereotypical tasting notes (blackcurrant for the Kenyan, floral for the Ethiopian). In contrast, the Colombian, an El Uamo, suggested notes of guava and strawberry, so I opted for that.

My coffee was served in a tall, white, cylindrical coffee pot, complete with lid, along with a matching tall, cylindrical, handleless mug, both presented on a long, narrow tray, which felt rather top-heavy as I carried it to my table. The coffee was fine, although I didn’t get any particularly fruity notes, just a good, full-bodied coffee that held its own as it cooled.