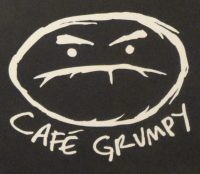 Café Grumpy has become my favourite New York City coffee shop/roastery chain, particularly since I discovered the Lower East Side location a few minutes’ walk from my usual hotel. So I was delighted when I met up with Simon and Gemma, fellow coffee aficionados who I know from Instagram, and they told me about a new branch of Café Grumpy, conveniently located just around the corner from their hotel in Little Italy.

Located on Mott Street, Café Grumpy opened in the early summer, 2016, several months after my last visit to New York, so I didn’t feel too bad about not having known about it. It’s in an area already rich with coffee, just a couple of blocks down from another favourite, Gimme! Coffee, around the corner from old friends, Caffé Roma, and one street from the lovely Café Integral.

In keeping with the Café Grumpy philosophy, all the branches, no matter how large or small, carry the same full coffee offering, with the house-blend, Heartbreaker, joined by a single-origin and decaf on espresso, while on pour-over, there are multiple single-origins, plus decaf, supplemented by bulk-brew for those in a hurry. There’s also a range of tea, plus a selection of cakes and pastries if you’re hungry.

September 2022: sadly Café Grumpy has had to close its Nolita location. Café Grumpy itself is still going strong with 10 New York City locations, another in New Jersey and one more in Miami.

Branches of Café Grumpy, as I’ve discovered, come in all sizes, from the large (Chelsea) to the tiny (Lower East Side). However, with the exception of the Fashion District branch, all those that I’ve visited have one (physical) thing in common: they’re all long and thin. In this respect, the Nolita branch is no exception. It has a very narrow street frontage, just a pair of half-glass double doors, flanked by a pair of tall, thin windows, which, it turns out, provide the interior with the majority of its natural light. If anything Café Grumpy is slightly taller than it is wide, which gives it a wonderfully high ceiling.

Inside, the coffee shop stretches out ahead of you, the counter at the front and the majority of the seating beyond it at the back. Immediately to the right of the door, there’s a set of retail shelves, then comes the counter, long and thin like Café Grumpy, with the short side, which faces the door, holding the pastries and cakes. The till is on the corner, then, along the long side, comes the grinders and espresso machine, a delightful two-group Synesso done out in bright, Café Grumpy orange.

To the left of the door, there’s a chiller cabinet, which is followed by a small takeaway station, then comes a pair of short benches. These flank another set of retail shelves which are built into the wall opposite the counter. The remainder of the seating is at the back, beyond the counter, which is where the flooring changes from some lovely tiling to some equally lovely wooden floorboards. On the left, there’s a single, thin pillar supporting the ceiling, followed by a row of four round two-person tables. Meanwhile, on the right, there’s an L-shaped bar which starts off overlooking the counter, then runs along the right-hand wall where there’s a single, frosted glass window, which provides the only natural light at the back of the building. Finally, beyond this is another two-person round table, and that’s it.

If you’ve ever been to a Café Grumpy, then the coffee offering will be familiar. There’s the ever-present Heartbreaker seasonal blend on espresso, where it’s joined by a single-origin espresso on the second grinder. During my visit this was a Cerro de Oro from Palencia in Guatemala. There’s also a decaf espresso on the third grinder. If you want filter coffee, then bear in mind that Café Grumpy has long been a pioneer of the pour-over, offering a range of single-origins, one of which is also a decaf. These are the same across all the shops, with a new coffee coming onto the menu every month or so.

While I was there, the choices were a Honduran coffee, plus two from El Salvador, while the decaf was from Peru, giving the whole menu a Central/South American feel (the Heartbreaker lets the side down in this respect, being a blend of Colombian and Ethiopian beans). At the barista’s recommendation, I had the Malacara B, one of the two El Salvador offerings, through the Kalita Wave. This is exclusive to Café Grumpy and is of the rare Yellow Bourbon variety. I found it a lovely, smooth, fruity coffee which evolved nicely as it cooled, the coffee’s sweetness coming through as the temperature dropped.

You can also see what I made of Café Grumpy’s Chelsea, Lower East Side and Fashion District locations, as well as the original in Greenpoint, Brooklyn.