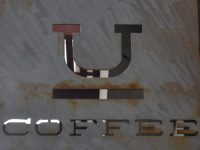 I recommend walking New York’s High Line to every visitor: that there’s so much excellent coffee along the way, starting with Blue Bottle Coffee at the southern end and continuing with the likes of Intelligentsia in the High Line Hotel, is an added bonus. Into that mix comes today’s Coffee Spot, Underline Coffee, which has been gracing its spot almost directly under the High Line on W20th Street (and across the road from the High Line Hotel) since 2014.

I first visited it in 2016, but failed to write it up for a variety of reasons, not least because shortly after my visit, Underline started roasting its own coffee under the Apes & Peacocks brand, thus rendering me out of date before I’d even put finger to keyboard. So when I finally got back to New York after a two-year absence, I made a return to Underline a top priority.

It’s an awesome spot, serving a house-blend on espresso and bulk-brew, with a range of single-origins available as either espresso or pour-over. This is backed up with tea, cakes and a small selection of things on toast, all served in a space that’s a cross between corridor and basement.

August 2020: sadly Brandon & Deb have taken the difficult decision to close both Underline Coffee and the Apes & Peacocks roastery. They will be sadly missed.

A handy sign, painted on the wall next to the High Line, alerts you to Underline Coffee’s presence, which is a good job, since there’s not much to see otherwise. A convenient staircase on W20th Street leads down to both Underline and the High Line Hotel, across the road on 10th Avenue. From street-level, Underline appears as no more than a slightly-recessed doorway under the building’s fire-escape ladder. There’s a glass door and a small bench outside, but that’s it. Inside, it’s not much wider, but goes back a long way, more corridor than coffee shop, reminding me of Edinburgh’s Cult Espresso or a smaller version of Washington DC’s Chinatown Coffee Co.

Underline is split into two, seating at the front, counter at the back, the midpoint delineated by the till on the left. Not that there’s much seating. Three wooden tables project from the left-hand wall, each seating two on high, plastic stools, while a long, narrow bar runs down the whitewashed right-hand wall with another five stools.

The till, along with the retail shelves on the wall opposite, form a natural pinch-point. I suspect many customers never get beyond here, simply ordering then returning to their seats. However, those in the know keep going, past the till, and onto the counter. Here you’ll find the gleaming Kees van der Westen lever espresso machine, something of a rarity in the city (Parlor Coffee has one, but not a lever machine), perched on the edge of the counter, beyond which there’s more seating, another row of stools stretching alongside the counter before wrapping around the back at the far end.

When I first visited in 2016, I was amply looked after by Brandon, a barista who shares the same name as the owner, but who goes by the Murph to avoid confusion. I was delighted to see him back behind the counter on my return and we quickly renewed our acquaintance. Back then, Underline used Counter Culture, but now Brandon (the owner) spends every Friday roasting at the Pulley Collective in Redhook, Brooklyn.

There’s a house-blend, Cornet, which forms the mainstay of the espresso menu and is also available on bulk-brew through the Fetco (Underline used to employ a 1-litre cafetiere, making a pot at a time and filtering it through fine metal mesh before keeping warm in flask, but sadly this unique method proved too time-consuming). When Underline was with Counter Culture, there were also two single-origins, but this has now expanded to five, with Brandon buying small lots and changing them as and when he runs out, which is usually a month or so.

These are available as either espresso or pour-over, so I started off with the Jeremias Lasso, a Colombian Geisha, through the Kalita Wave. A lovely coffee, very sweet and well-balanced with lots of flavour and a good body, it more than held its own as it cooled, being just as good, if not better, when cold.

Much to my disappointment, the Kees van der Western was broken during my 2016 visit, temporarily replaced by a La Marzocco Linea. However, on my return, the Kees was back, so I had to see it in action. Although you can have any of the single-origins as espresso, Murph recommended the Cornet, which was an excellent choice. Served with a glass of sparkling water, it was sweet and well-balanced on the first sip, a little more acidity coming through towards the bottom of the cup.

Finally I had the caprese toast, a single slice of toast with generous toppings of tomato and mozzarella, which perfectly filled my mid-afternoon gap.