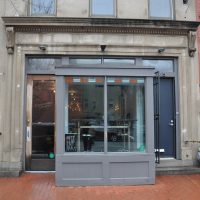 It’s a sign of how much I’m travelling and how many great coffee shops there are around the world that today’s bonus Coffee Spot is from one of last year’s trips, when I spent a day dashing around Washington DC in the rain. Chinatown Coffee Co is one of the capital’s stalwarts, having first opened its doors in 2009. Long and thin, it’s a cross between a corridor and a basement, a little reminiscent of the Dupont Circle branch of Filter Coffeehouse, which was my first ever speciality coffee experience in DC.

Chinatown’s stock-in-trade is the Black Cat espresso blend from Chicago-based, Intelligentsia. This is joined by a decaf espresso and four single-origins, available as V60, cafetiere or syphon, with two of them on the obligatory bulk-brew. Here Intelligentsia is joined by Portland’s Heart Coffee Roasters, with a new coffee appearing on the menu every two weeks. You can also buy a range of the beans to take home with you. Finally, there’s a selection of organic tea if you don’t fancy coffee.

If you’re hungry, there’s a range of pastries and cakes, plus a small selection of chocolate. On the savory side, there are sandwiches from Broodje & Bier.

Chinatown Coffee Co is in the northwest quarter of Washington DC, on the northern side of H Street, near its intersection with 5th Street. I mean, who needs street names? Close to Union Station, it’s not quite within striking distance for a quick coffee while waiting for/changing trains, but it makes an excellent starting (or finishing) point if you’re doing a tour and arriving/departing by train.

My day in Washington was one for long, thin coffee shops, since I also called in on La Colombe’s Blagden Alley branch. However, other than both being long and thin, Chinatown Coffee Co and La Colombe are like chalk and cheese. While La Colombe is bright and airy, with windows all down the long side, Chinatown resembles a cosy basement, the only windows being at the front. In this respect, it was much more like New York’s Underline Coffee, although none of these quite top Edinburgh’s Cult Espresso when it comes the coffee-shop-most-resembling-a-corridor stakes.

From the street, Chinatown Coffee Co has a modest appearance, a slightly projecting window on the right, and a single, glass door on the left, easy enough to miss if you’re not looking for it. Inside, its true size becomes apparent. A long, gentle ramp leads up past some seating on the right, which is the only part of Chinatown Coffee Co to enjoy natural light. There’s a two-person window-bar, followed by another two-person bar against the right-hand wall and then two low, four-person tables with benches rather than chairs. The ramp, and the metal barrier next to it, provide some respite for those sitting at the front from the inevitable flow of people as they come and go.

The ramp deposits you about a quarter of the way into the store. At this point it widens on the right to accommodate the counter, which occupies most the remaining right-hand side. Four low, two-person tables with stools line the left-hand wall, then comes the takeaway station with lids and milk, opposite which is a solitary bar-stool by a water tap at the back of the counter. Beyond this is the remaining seating, the only seating in Chinatown Coffee Co to have chairs. On the left are a pair of normal-height two-person tables, while beyond the counter on the right is a four-person table.

The counter, also long and thin, is uncluttered, starting with a retail shelf, followed by cake, the till and the two-group La Marzocco espresso machine, with its twin grinders (Black Cat and Black Cat decaf). There’s lots of space, with plenty of room to queue when ordering/waiting for your coffee.

I was spoiled for choice when it came to the coffee, but since it was cortado Tuesday (who knew there was such a thing?) that rather settled things, particularly since it was my first coffee of the day. My cortado, made with Intelligentsia’s Black Cat blend once again confirmed that it’s one of my favourite espresso blends. It was excellent, the perfect balance of coffee and milk, the sweetness of the milk complementing the coffee, which came through the milk strongly. Unusually, it was served in a tall, thin glass, but was no worse for that. Had I had longer, I’d have tried the pour-overs, but I had other fish to fry and more corridors to visit.

You can see what fellow coffee blogger, Bex, of Double Skinny Macchiato, made of Chinatown Coffee Co.