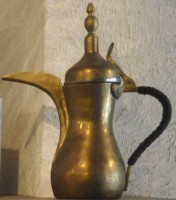 My first stop in Washington DC was the original branch of the Filter Coffeehouse and Espresso Bar, currently a chain of two coffee shops (the second is in Foggy Bottom, while there was a third which has since closed). The original is tucked away in a basement on 20th Street, just north of Dupont Circle, in a predominantly residential part of DC. In a fit of completely bad timing, I arrived precisely one day before Filter celebrated its fifth birthday. Go me…

To look at, with its steps down to a basement in a terrace of brick-built buildings, it instantly reminded me of Boston’s Wired Puppy. Filter has a small courtyard at the bottom of the steps while the door gives access to a long, thin basement space which, rather disconcertingly, runs off at about 30 degrees to the door! All the coffee is from nearby Ceremony Coffee Roasters, while there is also tea and, if you’re hungry, a small selection of cake.

This being the FILTER Coffeehouse and Espresso Bar, there’s an emphasis on filter coffee, with five single-origin beans available through the V60. If that doesn’t appeal, there’s the usual espresso range available as well.

If you want to sit outside, the Filter Coffeehouse and Espresso Bar’s sunken courtyard provides an excellent spot, being sheltered from the already quiet street. There’s a bench on the left-hand side, which catches the early morning sun, and two tables on the right which are even sunnier. Had they not been taken, I’d have been very tempted to sit outside.

This part of DC is very keen on its turrets and the building housing Filter is no different. It’s a neat feature though and, as symmetry dictates, you enter through the door in the turret’s centre, with a narrow window on either side. This, however, is where symmetry gives up, since Filter occupies a long, thin, low-ceiled basement which, bizarrely, runs off at about 30 degrees to the door. Quite why this is, I have no idea!

Once I’d gotten over this shock, the interior was quite pleasant. The only natural light comes from the two windows and the window in the door, but the basement is well lit by some neat light-fittings which cast interesting reflections off the ceiling. The colour-scheme is slightly subdued with browns and the occasional bright orange. This matched the atmosphere while I was there, which I would call contemplative, with most people devoting themselves to their laptops as rock music played in the background.

The entire left-hand side of Filter is taken up with the counter, while on the right, the brick-lined wall has all of the seating (unless you count the two window sills, one either side of the door, which can be pressed into service as additional seats). First comes a narrow bar with three stools, then, after a set of wooden shelves holding the retail offering, there’s the rest of the seating, a wooden bench running along the wall with five two-person tables, each with its own bright-orange chair.

The focus here is on the coffee, which is all provided by the local Ceremony Coffee Roasters. On espresso, there’s the house-blend, originally a bespoke blend for Filter, but, having proved very popular, is now supplied to other coffee shops by Ceremony. This is usually supplemented by a single-origin on the second grinder, but while I was there, this had been replaced by a special winter blend. Finally, there’s decaf on the third grinder.

However, the real focus is on pour-over. Filter has five single-origins, all complete with tasting notes. These can be had through the V60, with the filter rack right in the centre of the counter, so you can stand and watch your coffee being made (you may as well since it’s counter service, so you have to wait anyway). If you’re really in a hurry, there’s also the obligatory bulk-brew to be had, although I was pleased to see lots of people, even those ordering takeaway, opting for the hand-poured.

I started with a flat white, largely because it was first thing in the morning, I wanted something milky and I don’t usually see flat whites on American menus. Served in a classic tulip cup, the coffee came through the milk well, with a strong, bold taste. I followed this up with a (12oz) cup of the Ethiopia Wazzala (it was that or a 16oz cup!). This was well-made and a pleasant cup without hitting any great heights.