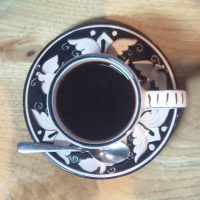 La Colombe, the Philadelphia-based coffee shop/roaster chain, has branches in five US cities, ranging from Boston in the north to Washington DC in the south, as well as expanding west to Chicago. Blagden Alley is one of four branches in the nation’s capital, and has been here for three years, set in what was an old Department of Transportation bus depot/garage, an amazing setting for a coffee shop. Long and thin, Blagden Alley has incredibly high ceilings and multiple windows, allowing the sunlight to stream in, particularly in the middle of the day and during the afternoon, where it lights up the exposed brick and plain plaster.

All the usual La Colombe staples are here, with multiple options on espresso, bulk-brew (drip) and pour-over. There is also a small selection of cakes and savoury pastries. The coffee is split into Classic and Workshop brands; the Classic is a darker roast, more old-school and includes blends such as Corsica on drip and Nizza on espresso, where it’s joined by decaf. The Workshop is focused on single-origins and lighter roasts, with one each on drip and espresso, plus three on pour-over. The specific beans on offer change every two months or so.

You need a little faith finding La Colombe, since it’s in a series of narrow alleyways tucked into a block between 9th/10th Streets to the east/west and N/M Streets to the north/south. Located on the corner of two alleys, it has a narrow, south-facing front containing a recessed porch-like structure, the long side running down the alley, punctuated with multiple windows, including one massive window which can be opened, up-and-over-style, like a garage door.

This, of course, only happens in good weather, not when I was there in February, a day after fellow coffee-blogger Bex (Double Skinny Macchiato) had departed, leaving me a gift of torrential rain.  Fortunately, La Colombe weaved its magic and the sun came out, Bex’s influence having finally warn off. It’s bizarre, since when approaching along Blagden Alley in the rain, the area looked distinctly dodgy, not exactly where you’d expect to find a light-filled, high-ceilinged haven of excellent coffee.

The porch contains a couple of benches and tables, providing some shelter from the elements. These flank the door at the back of the porch. Inside, the layout’s simple, counter ahead on the right, seating on the left, nine two-person tables with stools running along the wall/window opposite the counter. Beyond this, there’s an enclosed kitchen/storage area on the right, while on the left, two high tables with stools face narrow windows in the exposed-brick walls.

The counter starts with the cake, then comes the till with its obligatory flasks of bulk brew. After a generous work area, there are taps for the cold brew, a sunken La Marzocco and its three espresso grinders. At the far end is the filter area with an EK43, four smaller grinders and a pair of Silverton filters. In all, La Colombe has nine grinders, including the EK43 (which was “left behind one day and looks cool”) and one up front, used for grinding the retail bags.

La Colombe had abandoned its famous no menu policy a fortnight before my visit, since it created too much confusion. While I liked the philosophy behind it, I tend to agree. My barista was pleased to report that despite the arrival of the menu, the customers still talked to her.

I selected a pour-over, with my barista recommending the Ethiopian as having more body. La Colombe uses Silverton drippers, similar to a Clever Dripper; a cross between immersion and pour-over, with a metal mesh filter at the bottom. When the coffee is brewed, turn a tap and out it comes. My barista was right, the coffee had lots of body, but was quite subtle and fruity. Even when I got to the bottom of the cup and it had reached room temperature, my coffee still tasted amazing.

It was lunch time, but La Colombe doesn’t really do food (the only exception I’ve found is Fishtown in Philadelphia), so I had a savoury Danish pastry with cheese and (chilli) peppers. This was very chewy and a little bit sticky with a sweet glaze on the top, but at the same time, very tasty and surprisingly filling.

I also tried the Monkey Bread, described as a like a Cinnamon Bun but slightly less sweet/sticky and with nuts. This was as amazing as my coffee, with lovely, soft bread and cinnamon sugar, neither too sweet nor sticky. It kind of came apart in my hands into bite-sized chunks of bready goodness, with the occasional nut between the chunks. All-in-all the perfect choice, particularly since it meant I didn’t get my fingers too sticky for typing!

All this was served, as ever, on La Colombe’s amazing crockery.