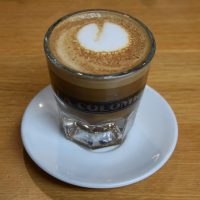 Over the years, I’ve become very familiar with La Colombe, the roastery/coffee shop chain from Philadelphia, having visited its coffee shops there, in New York City, Washington DC and Chicago. I’m also very familiar with Boston, having made many trips there, albeit mostly in the early years of the Coffee Spot (or before). However, it’s been over five years since my last major visit to Boston, in February 2016, which explains why I’ve never visited either of the city’s two La Colombe locations.

I was able to rectify this oversight on my latest trip to America, when, on my way back to Portland (Maine) from Washington DC, I had a couple of hours to kill at Boston’s South Station, where you’ll find La Colombe on the other side of Atlantic Avenue, directly opposite the entrance to the bus terminal. Off the foyer of a modern office building, it’s a large, spacious coffee shop with its own street entrance. The classic La Colombe offering sees two options on espresso, another two on batch-brew and two more on pour-over. There’s also a range of in-house teas and draft lattes and, if you’re hungry, cakes and items from the grab-and-go fridge.

South Station is one of two Boston La Colombes, the other (Seaport) a 15-minute walk across Fort Point Channel, just far enough that I didn’t have time to visit before catching my bus to Portland. Directly opposite the bus terminal, which is above the platforms/train tracks at the southern end of South Station, La Colombe (along with the nearby Gracenote) was the perfect point to break my journey, having just arrived by train.

Although the address is 745 Atlantic Avenue (it’s part of the office building, 745 Atlantic Avenue), the door is around the corner on Beach Street, where La Colombe runs down the side of the building. The entrance is set slightly back, accessed via three broad stone steps between square pillars, leaving a recessed space with a small, two-person outdoor table to the right of the door, sheltered from the elements. If you want to sit outside, there’s a second table around the corner to the left. This is similarly sheltered, next to the entrance to 745 Atlantic Avenue.

Entering from the street, you step into a small, glass-sided entrance porch, a door on the right leading into the coffee shop, the airlock-like arrangement a necessary precaution against the fierce New England winters. The bulk of La Colombe stretches ahead of you, running down Beach Street, with the seating in the windows to your right and the counter opposite them on the left. Behind you, to your left, is a smaller seating area, while immediately to the left of the counter is a door from the lobby of 745 Atlantic Avenue, which still provides many of La Colombe’s customers.

The smaller seating area is roughly square, with a tall, thin four-person table with stools in the middle and an L-shaped bench along the two of the walls, each with three small, fixed two-person tables, plus a seventh in the corner (the third wall is effectively the windows at the back of the entrance porch). The remaining seating is in the main space, which, as big as it is, feels bigger thanks to the high ceiling and the three massive windows that run along Beach Street opposite the counter. Each has a wooden bench with another four of the fixed two-person tables (three in the last window), easily the best seats in the house for watching the baristas working the two La Marzocco espresso machines.

You order at the short side of the counter, which is ahead of you as you enter, tucked behind an island retail unit stocked with La Colombe’s coffee and tea. If you’ve visited La Colombe before, the offering is familiar, the Nizza blend joined by a single-origin (Sun Peak from Guatemala) on espresso, while the Corsica blend and another single-origin (El Escorpión from El Salvador) are on batch brew. Finally, there are two more single-origins on pour-over (Harmony, Costa Rica and Tilu Mountain, Indonesia). There are also decaf options, with sparkling and still water on tap (at the end of the counter).

I selected the Sun Peak from Guatemala, the barista recommending a cortado if I wanted it in milk, which I did. Served in a characteristic La Colombe glass, the coffee combined well with the milk to produce a rich, biscuity taste. I paired this with a blueberry muffin, which was lovely, rich and moist, the perfect companion to my coffee.

Liked this? Then don’t forget to check out the Coffee Spot Guide to Boston & Cambridge for more great Coffee Spots.