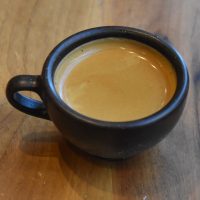 Regular readers will know that one of my go-to American coffee places is La Colombe, the roastery/coffee shop chain from Philadelphia. Along with its Philadelphia coffee shops, I’ve visited La Colombe in New York City, Washington DC, Chicago and, most recently, Boston, when I caught La Colombe, South Station between arriving by train from New Haven and catching the bus to Portland. However, that still left the subject of today’s Coffee Spot, the Seaport location, which I was able to catch just before my flight back to the UK on my most recent trip.

As the name suggests, La Colombe, Seaport is in Boston’s Seaport District, just across Fort Point Channel from Downtown Boston.  Although the address is Northern Avenue, it’s actually around the corner on the pedestrian strip connecting it with Seaport Boulevard. A fairly small shop, with just seven tables inside, this doesn’t stop it from providing the full La Colombe offering of two options on espresso, another two on batch-brew and two more on pour-over. There’s also a range of in-house teas and draft lattes and, if you’re hungry, cakes and pastries. For now, La Colombe only uses takeaway cups, so don’t forget to bring your own.

This is the second La Colombe in Boston, which opened in 2018, and is just a 15-minute walk across Fort Point Channel from the first at South Station. Although easily accessible from downtown Boston, other than for a couple of strolls around Fan Pier Park to take in the views (highly recommended, by the way), it’s not a part of the city that I know that well, having been heavily redeveloped over the last 20 years.

La Colombe is on a broad, pedestrianised street, on the left as you head towards the waterfront. Although the coffee shop doesn’t have any outdoor seating of its own, there are several long, concrete benches on the street that you are welcome to use. The front of La Colombe is all glass, a series of tall, floor-to-ceiling windows which wrap around the whole building, including the clothing stores which flank La Colombe.

The door is on the left, with the typical New England airlock-style system to keep out the winter cold. The first door opens into a large, glass-walled vestibule, while the second door, at the back, leads into the coffee shop proper. La Colombe occupies a broad, wedge-shaped building which is slightly narrower at the back. The counter is in front of you as you enter, with a short section at the back, running parallel to the wall, where you’ll find the limited selection of cakes, pastries and other snacks (unless, like me, you turn up an hour before closing at the weekend, when they’ll be long gone).

However, unlike a conventional counter, which would typically run along the back wall, this one sets off at 45°, extending into the front of the store, stopping short of the windows (reminding me of La Colombe’s Gold Coast location in Chicago). This splits La Colombe neatly into two, with a large ordering/takeaway section on the left and a separate seating area to the right, which is partly behind the counter. That said, there are two tables in the windows at the front, a low, two-person one to the right of the door, with a tall, four-person one next to that, opposite the end of the counter. The main seating, however, is formed by a bench along the right-hand wall, where you’ll find a row of five tables, each with a stool. Four of these are two-person tables, but the one at the front seats four and is tucked away behind a large, square pillar. Finally, there’s a standing bar against the back wall of the counter, but this doesn’t seem to be in use right now.

In keeping with La Colombe’s philosophy, there’s no Wifi, but the area has plenty of free Wifi, so you shouldn’t have problems getting connected. It’s also worth noting that, unlike South Station, which has gone back to proper cups, Seaport is still only serving in disposables due to COVID-19.

Seaport has the familiar La Colombe offering, the Nizza blend joined by a single-origin on espresso, while the Corsica blend and another single-origin (the Inga Red Honey from Colombia) are on batch brew. Finally, there are two more single-origins on pour-over (Sun Peak, Guatemala and Sierra Sur, Mexico). There are also decaf options, with a variety of draught (draft) lattes and cold brew on top.

I had the single-origin espresso, the Women of Ketiara, a washed coffee from the Ketiara Cooperative in Indonesia, served in my Kaffeeform cup.  A well-rounded, lighter roast, it had plenty of body, with a pleasing touch of acidity on the first sip, which set me up nicely for my journey to the airport.

You can also see what I made of all the other La Colombe locations that I’ve visited.