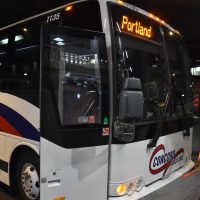 Welcome to the third and final instalment of this mini Travel Spot series about my impromptu trip to Washington DC back in November, itself part of my wider month-long trip to America. Part one covered my journey to Washington Union Station on Amtrak’s Northeast Regional 65 sleeper service, travelling overnight from Boston South Station. The second part, meanwhile, was all about my first time on the Acela service, travelling from New Haven back to Boston South Station. That just left the small matter of getting back to Portland from Boston, the subject of today’s post.

In an ideal world, I’d have completed the journey by train, taking Amtrak’s Downeaster from North Station. However, as much as I like travelling by train, the Downeaster is not very convenient compared to the bus. Although the same price (a very reasonable $24), the Downeaster runs once every three hours, compared to the bus’s hourly schedule. Plus, while the bus leaves from South Station, where I’d just arrived, to catch the train, I’d have to get myself over to North Station (admittedly a short tube ride or a 25-minute walk through the city centre, but an unnecessary additional step). So, the bus it was.

This is a fairly short post, which I’ve split into three parts:

You see how I got on once I’d reached Boston after the gallery.

Boston’s South Station is the terminus of Amtrak’s Northeast Corridor, as well as multiple MBTA commuter rail services, all of which are accessed by the grand old station building on the corner of Atlantic Avenue and Summer Street. However, if you wander a little way down Atlantic Avenue, you’ll come to the other Boston South Station, the South Station Bus Terminal. This serves multiple long-distance bus companies from a multi-storey building that was built over the southern end of the train tracks in 1995, with its own ramp to I-90 and I-93, along with a separate pedestrian entrance from Atlantic Avenue.

Although I’d been to Boston many times, the first time I caught a bus from South Station was in 2015, when I was on my way to Portland to start my coast-to-coast train ride. Back then, I remember being really confused by the separate buildings, almost missing my bus as a result. This time, however, I had no such problem. In theory, there is a walkway from the train part of South Station to the bus terminal, but in practice, with the on-going construction (part of a long-delayed overhaul of the station), I decided to go out onto Atlantic Avenue and make my way down to the main entrance. It’s worth noting that as part of the overhaul, the bus terminal is going to be extended, and, I believe, become more integrated with the train station which should, in theory, making getting between the two a lot easier.

It also helped that on this occasion, I wasn’t rushing to get my bus. I’d already decided to use the opportunity afforded by passing through Boston to visit La Colombe. This is on Atlantic Avenue, directly opposite the entrance to the bus station, and had been on my list for many years (there’s another, in the Seaport District, that I didn’t have time to visit, something that I rectified on my next trip to Boston). After that, I popped around the corner to the South Street Diner for lunch before quickly calling in at Gracenote for a pour-over to go in my Frank Green Ceramic Cup, which I took with me as I headed back to the bus terminal.

I was travelling with Concord Coach Lines, which runs a regular service between Portland and Boston, calling at either South Station or the airport (and, quite often, both). My bus, which was due to leave at 14:15, was a case in point, having started at the airport before calling in at South Station, after which it was non-stop to Portland.

I got to the bus terminal at 14:05 and, with hindsight, should have aimed to arrive a few minutes earlier (or, perhaps, resisted the urge for that one last coffee). Unfortunately, having a ticket (which I’d bought online) doesn’t guarantee you a seat on the bus, so if it’s full, that’s it: you’ll miss out and have to catch the next one instead. As it was, my bus had plenty of seats free, so that wasn’t an issue. Instead, I’d forgotten just how big the bus terminal is and, consequently, just how long it takes to get from the entrance to your bus.

While not on quite the scale of say, the Port Authority Building in New York City, it’s still a non-trivial exercise. From the entrance on Atlantic Avenue, you take an escalator to the next level, then follow a long corridor over to a marvellous rotunda, where you go up another level to the main concourse. The ticket desks are located around the edges of the rotunda, while the gates are through a separate entrance between two of the ticket desks. The only previous time I was at the bus terminal, back in 2015, I nearly missed my bus trying to work out where to buy my ticket (you need to use the ticket desk for the correct bus company) so I was glad that I’d bought my ticket online this time and could skip that part!

As a result, I reached my gate (#16) just in time, handing over my ticket (even if you book online, you still have to print your ticket out; there’s no scanning QR codes or anything fancy here) before boarding the coach. As soon as I was onboard, the driver closed the door and started to reverse out of the gate, much to the disgust of a family of four who arrived moments later. Two of them, trailing suitcases behind them, chased the bus out onto the tarmac, but the driver was having none of it, pulling away while cursing the pair quite loudly (although I doubt that they heard).

And, with that, we were on our way. You can see how the journey went after the gallery.

This was the third time I’d taken the bus to Portland, although the last time, in early 2020, I’d gone straight from the airport, heading up to Portland in the dark. I’ve written a little bit about the bus itself when I took it to get back to the airport at the end of the trip, so I won’t repeat myself here, except to say that the Concord fleet is fairly modern, with comfortable seats and plenty of legroom, free WiFi and at-seat power. On previous buses, this has meant both USB and mains power, although this time I just had mains, which was fine.

The bus was about half full, so I had get a pair of seats to myself and was able to settle in for the trip. As had been the case throughout my journey down to Washington DC and back, everyone was observing the mask rules.

Although the South Station Bus Terminal has direct ramps to I-93 and I-95, if you’re going northbound, like we were, it takes a surface route along Lincoln Street (and past Gracenote, where I’d just picked up coffee) before entering the northbound tunnel to join I-93 as it makes its way under the city centre (I’m old enough to remember when I-93 carved through the city centre on an elevated structure made of green-painted iron). Before long, we emerged from the tunnel onto the Leonard P. Zakim Bunker Hill Memorial Bridge as it crossed the Charles River before immediately leaving I-93 to loop back under the bridge and onto US 1.

From there, the route was fairly familiar, passing through the northern suburbs of Boston before reaching the more rural areas along I-95, which we joined just north of Danvers (there’s more about the route and the scenery along the way in my write up of the bus ride I took from Portland to the airport at the end of the trip). The drive itself was very smooth and uneventful, and we pulled into Portland ahead of schedule, just as the sun was setting at four o’clock, treating us to a rather spectacular display.

I had just enough time at the Portland Transportation Center (which doubles as the Amtrak station, serving the Downeaster) to have a quick look around, where I found a Downeaster train (although I have no idea which one) waiting just north of the platform. I’m still not sure what it was doing there, since the Downeaster actually runs from Boston’s North Station to Brunswick, two stops beyond Portland, so why one would be sitting idle at Portland, I’m not quite sure.

So that concludes my short trip to/from Washington DC by a combination of car, sleeper train, high-speed train and bus. To see what I got up to during the rest of my time in the US, check out the trip’s Travel Spot Page.

6 thoughts on “Brian’s Travel Spot: From Boston to Portland by Bus”